A high level government team headed by Vice President Khemraj Ramjattan visited the affected areas on Wednesday and meeting with residents to discuss relief efforts to the weeks-long flood situation. Relief for residents in flood affected communities across Region #5 continues with government intervention that will see the installation of new pumps and the clearing of canals and outfalls.

Three mobile pumps were deployed on Wednesday to help drain water from the land, two at Trafalgar and one at Bush Lot, State Minister Joe Harmon said.

The pumps are expected to take 1200 gallons of water off the land per second.

Additionally, six tractor pumps and four excavators have also been deployed and will help with the clearing of clogged canals.

A pontoon and two excavators are also helping to clear the outfall channels while a team from the Ministry of Public Infrastructure is in the area to assess works to be done.

Harmon said the flooding, which has persisted for several weeks, was due to heavy rainfall and farmers discharging water from their rice fields. Water had accumulated between 12 to 24 feet and resulted in the loss of cash crops and livestock. Minister Harmon noted that the course of action being adopted for Region #5 is consistent with other actions taken by the government in other areas. 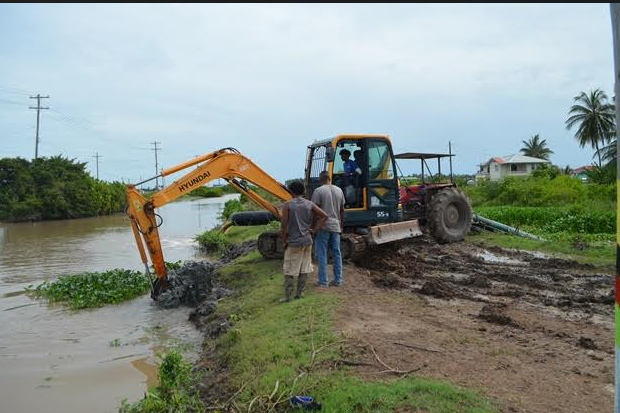 Over the weekend, affected residents in Moraikobai received food hampers from the CDC.

On Monday, scores of residents gathered on the roadway at Number 30 Village, and with the use of trailers, blocked the major access road to vent their frustration.