Govt. presses for increased gold declarations this year despite 2017 shortfall in meeting target The Ministry of Natural Resources has reported lower than predicted gold declarations, but higher foreign currency earnings in 2017.

Despite the lower declarations, the Ministry is maintaining an ambitious target of 800,000 ounces in gold declarations for 2018.

At a press briefing today, Minister of Natural Resources Raphael Trotman said gold declarations for 2017 stands at 623,754 ounces, representing a shortfall from the projected 700,000 ounces.

He explained that although the declarations are lower than projected the outturn is still higher, adding that the Guyana Gold Board sales for 2017 amounted to $241.9 million from 193,000 ounces of gold.

“So, although there are lower declarations there is more foreign currency in 2017 than 2016,” Trotman said.

Trotman also brushed aside comments by Opposition leader Bharrat Jagdeo that the industry has lost money because of his mismanagement. 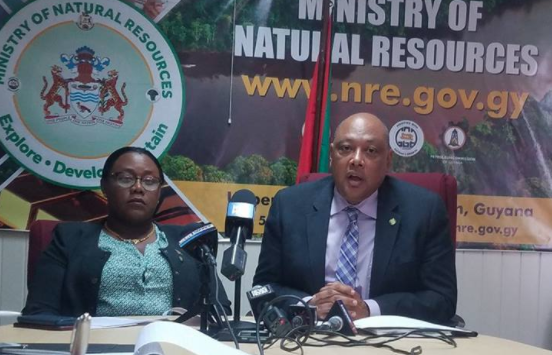 The Minister used the opportunity to congratulate all miners, small, medium and large, for their dedicated efforts and encouraged the continued declaring of gold to the Gold Board or license gold dealers.

“We have seen the impact of measures in 2017… there was some contraction based on uncertainty on where the government was going based on mining,” he added.

Mr. Trotman said there is great hope in 2018 that Guyana will achieve the ambitious target in declarations of 800,000 ounces.

The Ministry will also be focusing largely on improved safety and enforcement in the mining sector in 2018.