Five years after Copenhagen, pledges by developed countries to reduce emissions to ensure 1.5 or less than 2 degrees warming are still to materialise.

Minister of Natural Resources and the Environment, Robert Persaud made this comment during his address at the Opening Day of the United Nations Climate Change Conference, in Lima, Peru recently.

“We meet this year within the context of efforts to ensure a sufficiently ambitious and binding global agreement in Paris next year.  We also gather amidst increasingly compelling scientific evidence that climate change is the most urgent global threat we face,” stated Minister Persaud.

The Natural Resources and the Environment Minister pointed out that for small islands and low lying coastal states, such aspects as the recent confirmation that average global temperatures and sea levels are rising faster than predicted, spell disaster if left unchecked. In Guyana, with 90 percent of the population living on a coastal strip that lies at or below sea level, the risk is particularly acute.

“For my country, with most of our population and infrastructure below sea level, our very survival is threatened by these increasingly negative impacts.  It is imperative that adaptation be inscribed as an important element, and that the requisite resources be provided to help vulnerable countries safeguard themselves as they seek to grow sustainably and develop a green economy,” he said. 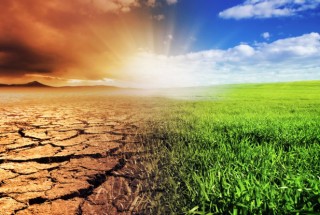 Minister Persaud added it is a matter of urgency that significant progress is made toward an ambitious agreement. “For us, that agreement must be legally binding, with flexibility for LDCs and SIDS.  It must also be structured to reflect the elements of the Bali Action Plan, with parity between mitigation and adaptation.”

Further, the recent announcements of China, the United States and the European Union for enhancing mitigation ambition, were welcomed by Minister Persaud. In this regard, he maintained that in the global fight against climate change, historical polluters must take the lead with economy- wide emission reduction commitments, and that historical responsibility should provide the basis of their contributions.

Accordingly, nationally determined contributions must focus on mitigation primarily, while allowing for linkages with adaptation and finance.  The contributions must be science-driven and assessed in a multilateral rules-based system. They must also ensure that the aggregate level of mitigation ambition should be 1.5 or well below 2 degrees Celsius and sufficient to ensure the livelihood of the most vulnerable.

As such, he stated that Guyana is committed to contributing to global mitigation efforts. “I am pleased to announce, in this regard, that the Government of Guyana has decided to ratify the Doha Amendment of the Kyoto Protocol, and will shortly deposit its instrument of acceptance.”

Guyana has demonstrated a high level of political commitment to fulfilling its role in the global climate change solution.  Even before the Copenhagen COP, Guyana adopted a Low Carbon Development Strategy which aims to conserve and sustainably manage our forests in an effort to reduce global carbon emissions and at the same time attract resources to foster growth and development along a low carbon emissions path. The agreement between Guyana and Norway launched one of the first national-scale REDD+ initiatives in the world.

If forest countries are to reconcile the world’s needs for forests to be kept intact with their own need to develop, then the challenge is to make national development and sustainable use of forests complementary, not competing objectives. For this to happen, the right economic incentives need to be in place and to ensure there are economically viable alternatives.

Meanwhile, Minister Persaud called on all partners to bring the elements together and to inspire and scale up actions that can lead to a low carbon future.

“Let us together pursue bold action and outcomes which will provide substantive elements and a clear timeline necessary to make a truly meaningful and ambitious global agreement a reality in Paris in December 2015,” he urged. (GINA)