Over 20,000 customers utilizing the company's internet, data, mobile and landline service in Region 10 and other communities faced a service black out late yesterday following damage to the fiber optic line along the Linden/Soesdyke highway. Faced with several incidents of sabotage to its cable system in different parts of the country, local telecommunications company, GTT, rolled out a $1 Million reward for any information that could lead to the arrest of persons who may be involved in the criminal offense.

The company on Wednesday afternoon hosted a joint press conference with the Minister of Public Telecommunications, Cathy Hughes, as it bemoaned the impact and concern about the constant deliberate acts to attack its infrastructure.

GTT Chief Executive Officer, Justin Nedd, said it appears as though every time the company rolls out an improved or new service, the deliberate acts would surface.

Over 20,000 customers utilizing the company’s internet, data, mobile and landline service in Region 10 and other communities faced a service black out late yesterday following damage to the fiber optic line along the Linden/Soesdyke highway.

Nedd said his team was able to locate the problem and correct the situation within hours, but he noted that based on inspection, heavy duty cutting machinery was used to damage the cable lines.  He said only someone or some organisation with knowledge of the cable system and its location would have ventured out during the night to damage the cables.

“When we look at the history over the last 10 years, with this type of sabotage, you find an incredible coincidence that such significant outages occur when we are making progress. I’ll go back to 2010, when we landed the sub sea fibre to provide internet to the entire country and that was sabotage but we fixed it because we have an awesome team and as recently as 2017 in February, when we launched the fastest internet in Essequibo, on the Essequibo Coast, we had sabotage there, but once again, awesome team, we fixed it. And now, that we are launching the fastest internet in the country with our 50 megabits per second of downloads, which is internet comparable or faster with most places in the US and Canada and we are seeing an increase in sabotage”, Nedd said.

He said the development is a blatant destruction of the country’s communication’s infrastructure.

“I would like to go on record by saying that this is being done by people who know what they are doing. This is an attack on the people of Guyana”, the CEO reinforced, adding that the situation has resulted in his company’s technical teams being forced out in the dead of the night to address the problems.

He said the company has filed a report with the Guyana Police Force. 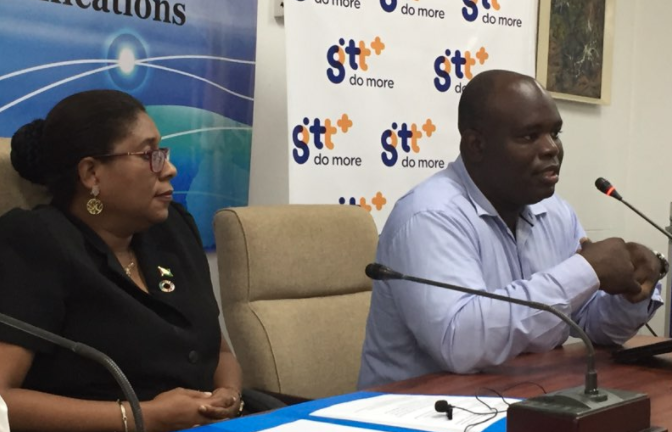 Minister of Public Telecommunications, Cathy Hughes, said the situation is criminal and she pointed to sections of the country’s laws which point to the deliberate damage to telecommunications equipment being a criminal offense.

Minister Hughes said this latest development of the sabotage to the GTT cables has left the country making one step forward and two backwards when it comes to development in the telecommunications sector. She said it is an attack on the country and comes at a time when there are moves to ensure more connectivity across the country.

She said “anybody that is callous and uncaring to cut a cable that prevents people in the case of an emergency not being able to pick up the phone and make a call and students who have mock exams not being able to submit those, it is unacceptable and we will deal with the perpetrators”.

She pointed to the many problems that could creep up as a result of the cases of sabotage. She said emergency lines would be down and even students who have to submit their assignments to CXC via the internet, have all found themselves being affected.

Asked if the government’s laid back response to an earlier complaint from GTT about its competitor using alleged illegal means to deliver data service, has open to floodgates to other illegal activities, Minister Hughes said she does not believe the two issues are connected but noted that the Government is examining that issue again.

GTT is hoping that members of the public could assist its efforts to put a face to the suspects. The company believes it knows who may be responsible,  but the CEO said he would not want to offer that information to the public as an investigation is underway.