The government of India has approved a US$50 Million line of credit for the construction of a major road that would link the East Bank of Demerara to the East Coast of Demerara. India has also agreed to concessional credit to supply a passenger ferry to help Guyana overcome transportation problems in the northern region.

The announcement was made by Indian Prime Minister Narendra Modi just after he held one on one discussions with President Donald Ramotar. Mr. Ramotar is currently on an official  state visit to India. 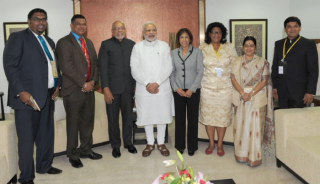 According to a statement from the India Prime Minister’s office Mr. Modi also  recalled his interaction with South American leaders on the sidelines of the BRICS Summit in 2014, and said India would set up its first IT Centre of Excellence on the South American continent, in Guyana.

The Guyanese President and the Indian Prime Minister also looked at various ways in which the two countries could work closer.

He is also being accompanied on the trip by First Lady Deolatchmee Ramotar.