The president expressed satisfaction with the positive outcomes of the discussions, noting that efforts will be further strengthened to intensify the economic, social, cultural and other types of relations between Guyana and the two countries. 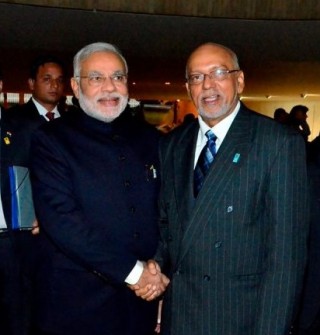 Guyana’s president requested the help of Indian experts to explore its hydrocarbon resources, a burgeoning sector, and also for the legal sector.

India has already a very high level of co-operation in infrastructure, mining, roads and information technology, and it has been offering a line of credit on regular basis. The two leaders have expressed their desire to build even further on these areas of cooperation.

China and Guyana also have strong ties in the field of infrastructure, mining, forestry, banking, construction and shipping. Both leaders have also committed to build on these and other emerging sectors.

The leaders of the BRICS held closed-door talks in Brasilia with counterparts from Argentina, Chile, Colombia, Ecuador, Venezuela and other Latin American nations.

The gathering follows a BRICS-only summit Monday in the seaside city of Fortaleza, where the five nations agreed to create the $50 billion bank for infrastructure projects and a $100 billion crisis reserve fund described as a “mini-IMF.”