In his absence, Bisram, was on Thursday charged in Guyana for the murder of Corentyne carpenter,Faiyaz Narinedatt. He became the 6th person charged with the murder of the young man. The International Criminal Police Organization (Interpol) has issued a wanted bulletin for Guyanese national, Marcus Brian Bisram who is wanted in Guyana for murder.

In his absence, Bisram, was on Thursday charged in Guyana for the murder of Corentyne carpenter,Faiyaz Narinedatt.  He became the 6th person charged with the murder of the young man.

The Interpol bulletin came just two days after the Guyana Police Force issued a wanted bulletin of its own.  It is suspected that the man may be hiding out in the New York area.  He is believed to have at least four properties in New York, including a swanky one in Manhattan.

Bisram’s  mother and sister were earlier this week slapped with bribery charges in connection with the same murder case.  As Police investigators prepared to wrap up their case and put together their charges, two investigators were allegedly offered $4 million by the two women as bribe money to discontinue their probe.

A bodyguard who would usually be at Bisram’s side during his visits to Guyana has also been charged with the murder.

The Police believe that Bisram planned and paid for the murder of the carpenter after the man reportedly turned down his sexual advances. The two were friends, according to persons familiar with the case.

The carpenter was snatched and beaten into an unconscious state then his body dumped on the roadside and ran over with a car to make it appear as if he was the victim of a hit and run accident.

Anyone knowing the whereabouts of Marcus Brian Bisram should contact the nearest Police station or call 911. 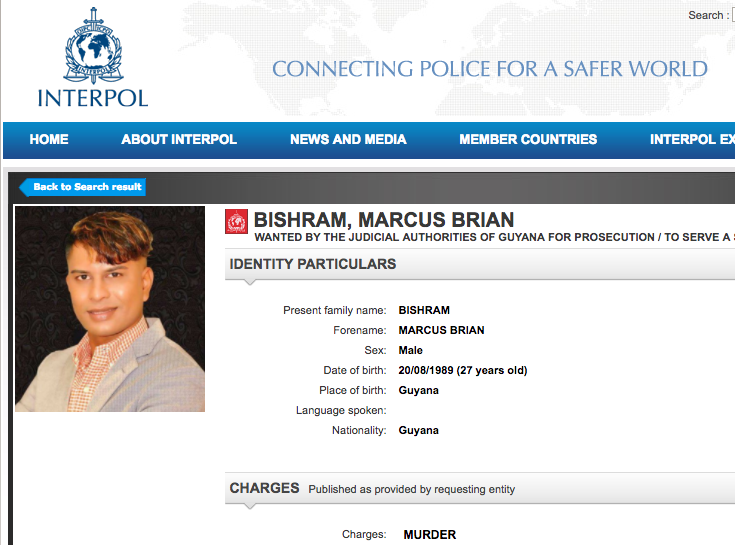