The Movement Against Parking Meters group brought together students, business owners, business executives and the ordinary worker, who all rallied against the parking meters calling for there to be a complete review. Over three hundred persons braved the midday sun and staged a large protest outside City Hall on Friday against the Council’s introduction of parking meters.

But the protesters against the parking meters, found themselves being protested against by a smaller group that supported the meters.

Although they did not clash, chants for and against the meters could be heard as everyone wanted their voices to be heard.

The Movement Against Parking Meters group brought together students, business owners, business executives and the ordinary worker, who all rallied against the parking meters calling for there to be a complete review.

Many of the protesters used their lunch breaks at work, to add their voices and placards against the parking meter system.

They complained that the costs attached to parking are too high, especially for those workers who would be forced to utilize the parking spaces for the eight hours that they are in their offices. 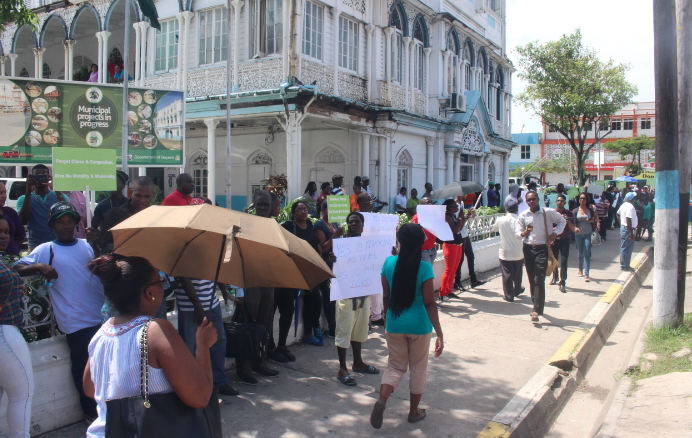 One of the founders of the movement, businessman Komal Ramnauth, said the parking meter deal must be reassessed.  He told News Source that it serves as an added burden to citizens of the city.

“This is not a political movement, it is a citizens movement and we first want to make that very clear. This is about all of us coming together to correct a wrong. Because this will affect everyone and will affect businesses in one way or the other”, he said.

Ramnauth may have wanted to make that statement clear as a group of Opposition supporters also came out to protest against the parking meters.

But another member of the Movement Against Parking Meters, Robin Singh said “I can understand that they are here to stay but the price is just too high. Make it affordable.”  He said he would be willing to pay $20 per hour for parking.  The current cost is $200 per hour plus VAT.

As the protesters continued to voice their disapproval with the meters, the other group that made it clear that they are for the meters, said the City must be developed and therefore the Council would need revenue to assist in that development. Some of them also pointed out that the introduction of the parking meter system has provided jobs for more than 100 persons. 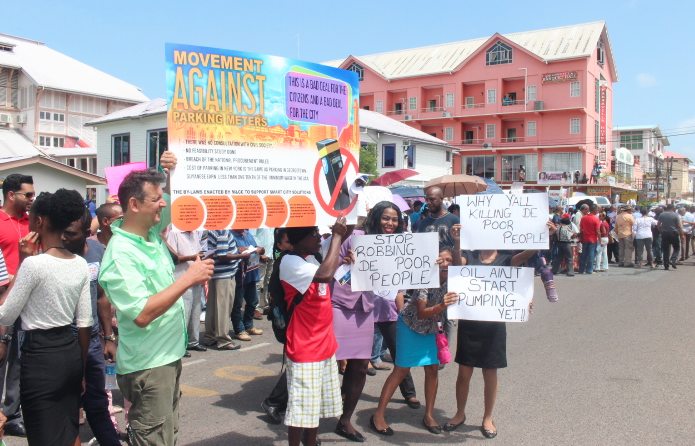 City Mayor, Patricia Chase-Green came out of City Hall and stood on the side with the protesters in support of the parking meters.

She said she does not believe the $200 per hour parking rate is too high, but added that she is willing to speak with representatives of the newly formed group.

“No one has come in to talk to us and to have discussions and raise concerns, we are just seeing the protest here and on social media, but no one is coming to talk to us”.

The Mayor said she is very open to a meeting with the Movement Against Parking Meters.

To that invitation, the founder of the group, Komal Ramnauth, said he and representatives of the protesters are ready to meet with the Mayor and the company in charge of the parking meters.

Activist, Nadia Sager, was loud in her condemnation of the parking meters and the prices. She raised concern about the by-laws that are to be implemented and noted that more education should have been done before the introduction was rushed.

Town Clerk, Royston King, was adamant that the meters are here to stay and there would be no reduction of the parking prices “at this time”.  He said the introduction of the meters form part of a modernization plan, and the protesters against the meters must be against a modern city. 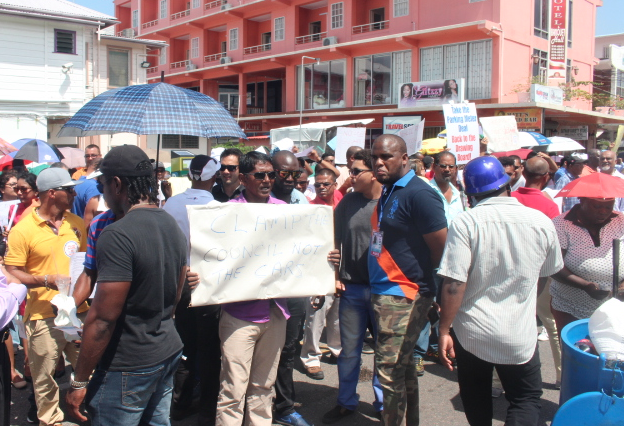 Officials of Smart City Solutions, were nowhere around the dueling protests.

On Thursday, the Government announced that the by-laws to govern the parking meter system have been sent to the Attorney General chambers for advice, before they are taken before the cabinet.