In a wide ranging interview with TeleSUR English TV network in Caracas, Mr. Maduro complained of the position taken by the Guyanese leader against Venezuela's decree claiming Guyana's territory.

Venezuelan President Nicolas Maduro is not happy with the change of government in Guyana and believes that Guyana’s new President, retired Brigadier David Granger, has come to office to provoke Venezuela and divide the Caribbean.

In a wide ranging interview with TeleSUR English TV network in Caracas on Thursday, Mr. Maduro complained of the position taken by the Guyanese leader against Venezuela’s decree claiming Guyana’s territory.

“We regret that a president has arrived in Guyana, David Granger, whose sole intention is to provoke Venezuela, in his mission to divide the Caribbean. I do not believe he is in favor of Latin American unity, he simply came to ignore international law and conflict resolution mechanisms through diplomatic channels and dialogue. He is trying to impose a point of view regardless of history”, Maduro said.

President Granger has been forceful in his position that Venezuela must withdraw the decree and must desist from attempts to block development of Guyana’s maritime resources. Mr. Granger has also been picking up the support of the international community.

Earlier this week, the Venezuelan President withdrew the first decree which claimed Guyana’s oil rich waters and replaced it with a new decree which has no defining coordinates.

During his television interview, the Venezuelan leader also lashed out at the US Oil company ExxonMobil which is currently drilling for oil in Guyana’s waters. Maduro said the american oil company has been pushing the issue and he even accused the company of financing the campaign of the newly elected Guyanese President. 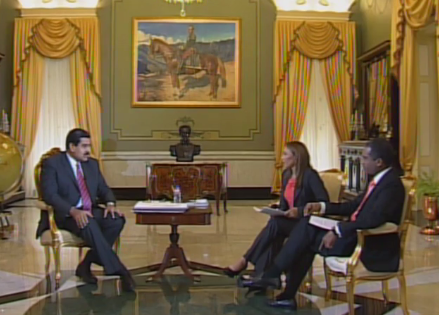 Venezuela had first objected to the presence of the ExxonMobil oil rig during the previous administration and had received a strong diplomatic note from the former government objecting to the issue.

President David Granger addressed the National Assembly on Thursday and made known his government’s position on the issue. He said Guyana will move ahead with the development of its resources and will not allow Venezuela to interfere and block economic development within Guyana and its territorial waters.

President Granger said Guyana’s first line of defence on the issue will be diplomacy.