New Regional Chairpersons urged to be leaders and not “party chairmen” President David Granger has called on the newly elected Regional Chairpersons and their deputies to be regional leaders and not “party chairmen”.

On Friday, the officials were sworn in before President David Granger at the Ministry of the Presidency.

After taking their oath of Office, the President in his charge to the chairpersons and their deputies urged them to take their oath seriously.

“I’d like to encourage you to pay close attention to the words that you uttered, the oath that you took, and the documents that you signed, in a flash you have decided to administer the 10 regions of Guyana, without fear or favour, affection or ill will.”

Pointing to the seriousness of the oath, the President told the officers that they are expected to administer those regions for the benefit of all the residents.  “It is not an idle oath, it is something that you must take seriously, when I was sworn in as President of this country those were the words that I uttered on the 16 of May, I said I’m the President for all of Guyana.” 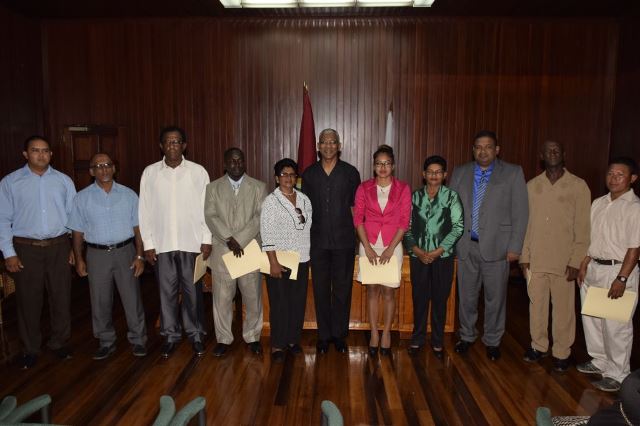 In this light, the President said all the people of Guyana must have access to him as President and to the good things that flow from his administration.  “Similarly in your region, all the people in your region, regardless of their religion or their ethnicity , regardless of what part of the region they are from, must get the benefits of your judgment, must get the benefits of your good will.

Equally important too, the President said is for, civil society, councillors, social partners and other stakeholders to be involved in decision making for the regions’ best interest.

The President said that even as these plans are being crafted, serious consideration must be given to clearly defined economic goals.

“Every single region can be rich, no region is desert, no region is swamp land, and every region has resources, human resources, material and natural resources, and we must decide how those resources must be exploited in order to benefit our people.”

The chairpersons were also advised on the importance of going after investments for their respective regions as plans are on stream for creating more towns in the regions, with the aim of attracting more investments.

Infrastructural development in the various regions is also important, President Granger said as he pointed to the need for state-of-the-art sport facilities, technical institutes, banks, and upgraded aerodrome.

Further, the President also encouraged those regions with resources to produce hydro electricity to play their role and come up with initiatives that will benefit themselves and all of Guyana.

The President also took the opportunity to congratulate the newly elected officers as he called on them to embrace the plan of action for regional development. (GINA)