Mother of seven burns house down A mother of seven children is in police custody after she allegedly set fire to her Bamboo Drive, Meadowbrook home on Mother’s Day. The house was completely gutted. Firemen were called to the scene just before 3 o’ clock on Sunday afternoon when neighbours noticed the blaze and raised an alarm.

The woman fingered in the arson has been identified as Nicola Gomes and according to neighbours, she suffered a “mental breakdown” after the birth of her 7th child and has been “acting strangely” since then. She is believed to be in her mid 30’s.

The children no longer lived with the woman. Her husband, according to relatives, moved the children from house a few months back because of the woman’s behaviour. They now live with cousin in the same area. The husband however, remained in the house with his wife. 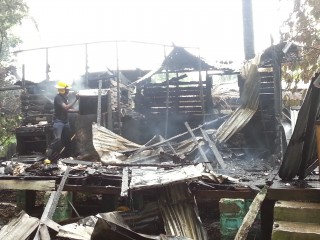 A close relative said tragedy struck the family twice in the same day since the husband was admitted to the hospital early Sunday morning after he was badly burnt at his workplace when a gas stove exploded.

A young girl who lives next door said she was returning home from an errand when she noticed the woman hurrying out of the yard with a small bag. She said the woman turned back and returned to her yard and it was then that she noticed heavy smoke emanating from the wooden house.

“I saw the fire in the house and I said oh shoot like she light something on fire, but then she turned back and I thought she was going to put the fire out”, the neighbour said.

Instead, the woman stood at the bottom of the stairs and prevented a group of young men who were trying to gain access to the house to put out the blaze, according to the neighbour.

When the firemen got to the  scene, most of the house was already gutted. Neighbours said there was not much the firemen could do other than douse the blaze and prevent it from making its way to the nearby houses. 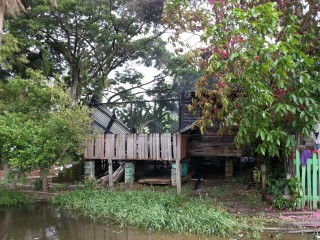 A young man who said he is a relative of the woman’s husband said she turned up at home where her children were staying early this morning, requesting that she be allowed to leave with two of the small children.

He said he told her he could not allow that and the woman tried to over power him to gain entry into the yard. She bit him twice on his right arm before eventually leaving that house to return home.

Another neighbour of the woman said persons in the area were aware of the woman’s mental problem but never expected that she would have “burned her own  house down”.

Neighbours came out on the street as the firemen extinguished the blaze and many of them could be heard whispering about the mental state of the mother of seven.

One resident in the same area who gave her name as Towana, said she now hopes the woman will get the treatment for her mental condition and is not thrown into the lock ups.

16 Responses to "Mother of seven burns house down"