A 55-year-old visually impaired man from Greenwich on the East Bank of Essequibo has been remanded to prison after being refused bail for the charge of inciting to commit a felony of murder.

The father of six whose name was given as “Lochan”, appeared before Magistrate Fabayo Azore at the Georgetown Magistrates’ Court on Monday afternoon and was not allowed to enter a plea to the indictable charge.

The Prosecution’s case is that on Friday 10th May, 2013, “Lochan” appeared at the East Street, Georgetown office of Political Activist Mark Benschop and asked Benschop to hire two men to kill two persons known to him (Lochan) and whose name he provided to Benschop. The Political activist contacted the police and the man was arrested. 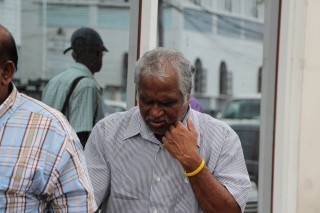 The Police Prosecutor objected to bail on the grounds that “Lochan” may still be able to find someone else to complete “the job” that he was seeking hit-men to carry out.

Lochan’s Attorney told the court that his client is blind and has been blind for the past 22 years and therefore would not be in a position to carry out what he called the “speculative” matter.

The Attorney said the visually impaired man ought to be granted bail since he posed no flight risk.

Magistrate Azore refused the Defendant’s request for bail, telling the Court that having seen the particulars of the matter, the offence is a very serious one.

As the Magistrate announced her decision to refuse bail, the man could be heard shouting “lemme get bail nah, me nah see”. He was led from the court by the Police and handed over to the policemen responsible for transporting prisoners to the Camp Street Jail.

Three relatives of the man sat in court and were emotionless during his appearance. They quickly left the courtroom when the matter came to an end.

One Response to "Blind man charged and remanded for inciting murder"