The Government of Guyana has announced that it is trying to convince Air China to begin a service to Guyana. That service could be offered via New York. Air China is the world’s 10th largest airline and is the National Flag Carrier of China.

The carrier currently operates 11 non-stop flights between New York and Beijing per week. If the airline were to consider flying to Guyana, it would be the first time that it would be entering a Caribbean market. However, Guyana could become its 2nd South American destination since it operates flights between China and Brazil already.

News Source understands that initial approaches have been made to the airline by the Guyana Government through the local Chinese Embassy. Guyana and China share a very strong relationship. China has pumped hundreds of millions of dollars into several local projects and Chinese companies and contractors have found themselves being granted major development contracts in Guyana. 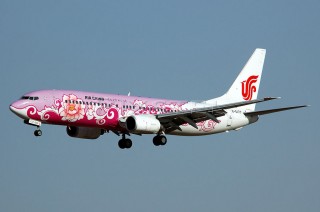 President Donald Ramotar confirmed the move late last week at the launch of a new investment magazine. The President said approaches have also been made to two U.S based airlines including the low-cost carrier Jet Blue.

This is not the first time that Jet Blue has been approached by the Government of Guyana. Back in 2011, the airline had sent a team of senior officials to Guyana to meet with the Government and observe the market and its possibilities.

But the approaches to Air China and the two U.S Airlines are being made even as a Guyanese owned Jamaican Airline remains on the waiting list to be granted approval to begin service between Georgetown and New York.

Fly Jamaica which is owned  by Guyanese Paul Reece has been awaiting approval for over a year from the Guyana Authorities. Reports suggested recently that the airline has been given the green light to begin operations from the Guyana Civil Aviation Authority but the Government was still to act on the recommendation.

On Thursday, Cabinet Secretary Dr. Roger Luncheon said the issue had not reached the cabinet level as yet but he is aware that more documents and information about the airline have been requested by the authorities.

In the past 10 years, at least five airlines have either pulled out of the Guyana market or have shut down their operations. EZ Jet was the last Guyanese owned airline that attempted to provide another choice between Guyana and the North American markets. EZ Jet’s operations folded just after its Chief Executive Officer was charged in a multi million dollar U.S health care fraud case.

U.S Authorities believe the former Airline CEO used money he had allegedly stifled off from two health insurance companies to start-up his airline.

Many of the airlines that have left have complained about the high costs for aviation fuel in Guyana and an unpredictable market.