Jamez took his own life on Boxing day after he escaped police custody. He had been arrested for abusing his 16-year-old girlfriend. His lifeless body was found in the home of a close friend in South Ruimveldt. The mother of 21-year-old Lorenzo Jamez, the young man who committed suicide after a fight with his girlfriend and an escape from Police custody, has declared that her son was no monster, as has been portrayed by his former girlfriend and her family.

Jamez took his own life on Boxing day after he escaped police custody. He had been arrested for abusing his 16-year-old girlfriend. His lifeless body was found in the home of a close friend in South Ruimveldt.

He had gone to the friend’s home to rest after escaping from the police.

It is believed that he may have ingested a poisonous substance just after escaping the custody of the police.

Today, his mother, Orian Ossorio, fought back tears as she explained to News Source that while she would not defend her son’s wrongdoing, he was a young man who lived for his girlfriend and loved her to the very end.

She said family members could not speak ill of the young woman or question the relationship because “he would ups me”.

“My son was no monster”, she declared, while explaining that he was in fact living home with the teenager to her mother’s full knowledge in the same house with the mother.

The grieving woman said her son moved to Guyana from Venezuela seven years ago and developed a relationship with the teenager just a few years ago, much to her disapproval.

“I told him this is a young girl and you will have to take care of her”, she said.

According to young man’s mother, the relationship was encouraged by the girl’s mother because the young man provided them with everything to maintain their home.

“My son worked two jobs just to ensure they got all that they wanted. He always protected her and even when he moved in with her and I told him to move back home, he remained there because he was in love and the girl’s mother did not have a problem. He did everything at that house, he paid bills, he made repairs and event built a fence. Whatever they wanted he was there for them and always assisted”.

She said she does not know what triggered the latest altercation between the young couple that resulted in his arrest and subsequent suicide, but she maintains that he must have been pushed over the edge by something. 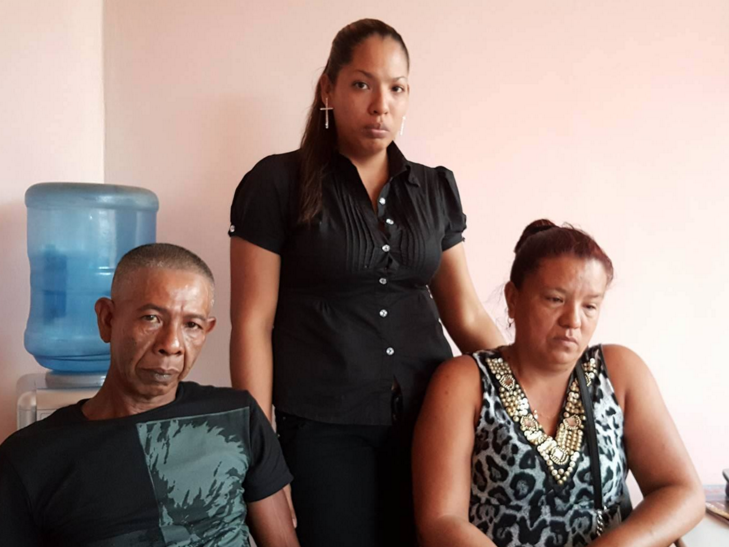 Family in mourning. Father, sister and mother of Lorenzo Jamez

A post mortem examination was completed on the body of the young man this morning and it confirmed that he died from ingesting a poisonous substance.

There were also a number of bruises on his body and the family believes that those marks of violence point to a fight between the young couple.

The dead man’s sister Carolina Jamez, said she is still trying to come to grips with her brother’s death and she just can’t believe that he would take his own life. She said she is upset with the way her brother was portrayed by the girl and his family as if he was a stranger to them.

“He lived there up until the time of his death. He was always there doing things for them and even paying fees for the girl’s education.”, the sister lamented.

She said although the police informed the family that a suicide note was found near to his body, they are still trying to understand his death.

The family described Lorenzo as a loving and always caring young man who never showcased a violent streak to them.  They are now making plans for his funeral even as they try to understand his death and the circumstances that led to it.