Residents in the West Ruimveldt area were left in a state of disbelief on Monday evening following the discovery of the lifeless bodies of a 22-year-old young man and his 23-year old girlfriend. The young woman’s throat was slit and was found lying on a bed. The young man’s body was discovered hanging in the same room.

Police investigators are treating the case as a murder suicide. It is believed that the young man Kenroy Crandon slit throat of his girlfriend Sheryann Tiware then hung himself moments later.

The two were involved in a relationship  for years according to the man’s  aunt who only give her name as Donna. 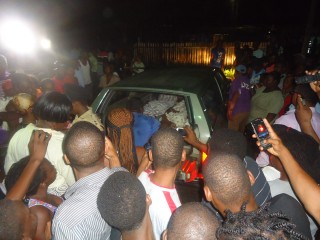 The aunt said it was clear that her decision did not go down well with the two and the young man would often complain about not being allowed to have his girlfriend over. The woman said her decision was to prevent something bad happening to the young lady since the two were always involved in arguments and fights when they lived together. She said the last time she saw the young lady was back in September.

According to the aunt, she saw her nephew on Monday morning as he was getting ready for work and had a brief conversation with him about the pouring rain and his job. The woman said later in the day she saw him in the kitchen of the house and she retired to her room.

It was just after 5 o’ clock on Monday afternoon that the gruesome discovery was made.

When the two kicked open the door, she spotted her young nephew hanging from the roof and was left in shock. As they made their way into the room, she was even more shocked when she saw the young girlfriend sprawled on the bed with her throat slit. She was fully clothed.

She said she could not understand how no screams were heard coming from the room and she believes the loud noise that grabbed her attention must have been when her nephew hung himself.

The aunt said she tried her best with her nephew and she continuously warned the young woman about their relationship.

Scores of persons in the area came out to get a glimpse of the scene as the two dead bodies were placed side by side in the back of a hearse and driven away to a city morgue.