The new Vice Chancellor said he plans to fix the untenable situation he has inherited and called for the support of staff, student body and the government. Ensuring that staff  members are better paid and improving the aesthetics of the University of Guyana are some of the priorities for the institution’s new Vice Chancellor, Professor Dr. Ivelaw Lloyd Griffith.

Dr. Griffith assumed the post as the University’s 10th Vice Chancellor on June 14th, replacing the once embattled Jacob Opadeyi.

Dr. Griffith met with the media on Friday and outlined several areas of engagement to help rebuild the University of Guyana.

The new Vice Chancellor said he plans to fix the untenable situation he has inherited and called for the support of staff, student body and the government.

He endeavors to push for the University of Guyana School of Medicine being re-accredited.

The accreditation was lost in July 2015, following the university’s delay in submitting a report on the school’s progress to the Caribbean Accreditation Authority for Education in Medicine and other Health Professions (CAAM-HP).

Griffith said he will ensure that staff members are paid a decent salary and he referred to the increase staffers received earlier this year but opined that it was not sufficient.

He intends to meet with the Finance Minister shortly to set the stage to get the government to do more for the University. Dr. Griffith also said the University must be able to give lecturers the tools to carry out their work. “We have to be candid in ourselves, not only do we have to give the lectures more money but we have to find the tools,” Griffith said, as he called also on academic and non academic staff to do more research.

The aesthetics of the campuses at both Turkeyen and Tain, will be upgraded to reflect a clean and wholesome environment in which learning is expected to take place. 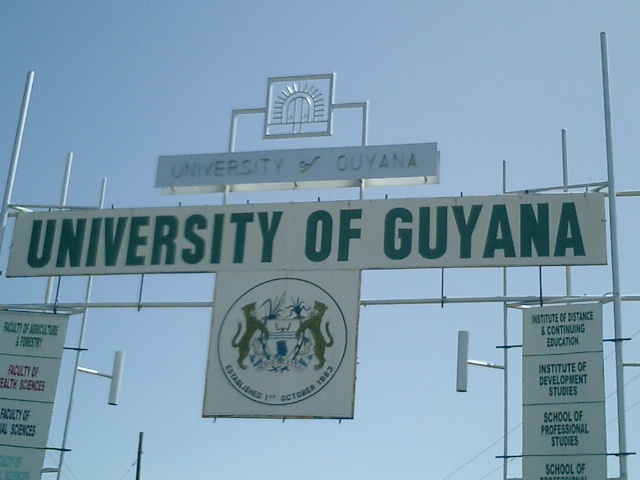 “We must do innovative things and figure out what new must this university do. We need to have a business school and we intend to bring a feasibility team to tell us how best to do that,” he added.

As a Political Scientist, Dr. Griffith served earlier as a tenured professor of political science and provost and senior vice president at York College of The City University of New York from 2007 to 2013.

Dr. Griffith holds a Bachelor of Social Sciences, with distinction in political science, from The University of Guyana, a Master of Arts in Political Science and Public Administration from Long Island University, New York, and both a Master of Philosophy and a doctorate in political science from The City University of New York Graduate School. He also graduated from Harvard Graduate School of Education’s program in educational leadership.