The pedestrian was rushed to the Leonora Hospital where doctors pronounced him dead on arrival. He has been identified as Roopchand Ramkellowan of Tuschen Housing Scheme. A 28-year-old officer of the Guyana Defence Force is in custody and will likely face a charge of causing death by dangerous driving after he slammed into a pedestrian on Sunday night on the De Willem Public Road.

The pedestrian was rushed to the Leonora Hospital where doctors pronounced him dead on arrival. He has been identified as Roopchand Ramkellowan of Tuschen Housing Scheme.

The driver of the Nissan X-trial pick up was taken into custody. According to the Police statement, a breathalyzer test revealed that he was over the legal limit for alcohol.

The driver has been identified as  Eson Trim, who is a Lieutenant in the Coast Guard of the Guyana Defence Force.

Investigators also recovered an unlicensed firearm and matching rounds in the possession of the dead man.

Investigations have so far revealed that the victim was crossing the road from south to north when he was struck by the motor vehicle which was proceeding east along the northern carriageway.

A post-mortem examination was conducted this morning and the cause of death, according to the Police, was given as multiple injuries due to a motor vehicle accident. The investigation is underway. 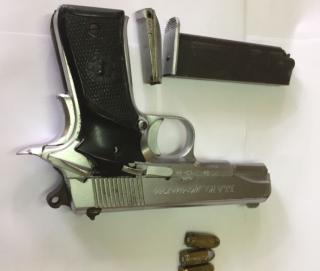