The first time candidate told News Source that as an individual in a PPP/C government, he will endeavor to strengthen the institutions to fight corruption but underscored the need for citizens with higher levels of integrity and values. People’s Progressive Party National Candidate, Charles Ramson Jr. believes fighting corruption may not be as easy many persons believe it is, but he is prepared to do his part in tackling the problem once the PPP is re-elected into office.

The first time candidate told News Source that as an individual in a PPP/C government, he will attempt to strengthen the institutions to fight corruption but underscored the need for citizens with higher levels of integrity and values.

“I see APNU and AFC saying they will stop corruption, good luck because we will be the only country where there is no corruption… it is an example of human frailty and so the fight against corruption must always be a principle that can never be avoided.”

Ramson has been traveling across the country on the campaign trail for the PPP and said that he has been swept off his feet over the exceptional competitiveness of the campaigns.

At a mid-morning interview with News Source on Thursday in the lobby of the Marriott Hotel, Ramson said there were both positives and negatives that could be said about the campaigns of both the PPP and APNU+AFC coalition.

“I am very impressed and proud that this elections is more competitive than there may have ever had… nobody knows who’s going to be the winner in this elections and I love that,” Ramson said. But he expressed fears that persons within the opposition coalition may not be willing to accept the results should the PPP Civic win the Monday polls. 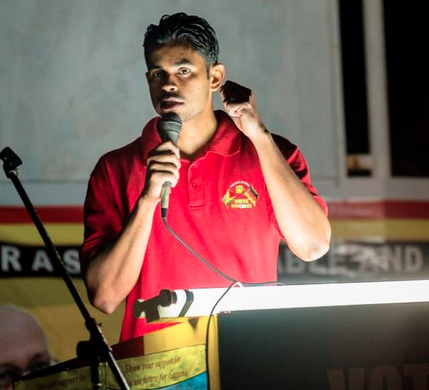 Charles Ramson Jr. during a speech at a political meeting

“It would be difficult to imagine that there wouldn’t be reluctance to accept results and violence,” he added before explaining that his fear is premised on the unwavering belief within the coalition that it will win the elections and historical records and practice.

He said he is convinced that the majority of eligible voters have already made up their minds as to who they will support on Monday.

During the interview, the young Attorney who has worked at the Office of the President said that “despite all the bad things that are being said, my party has been able to build a democracy that we now live in a country where both sides of the political coin don’t know who is going to win and they both believe they are going to win.”

He hopes that he will be able to represent Guyanese at the Parliamentary level.

Ramson laughed as he spoke about himself and what he brings to the table; asserting that regardless of the outcome of the elections, he will always strive to be a voice of the people.

He believes he brings to the table the ability to seize opportunities when it is presented before him “I am no better than anyone and no one is better than me… that’s my principle… I believe I have the matching values and integrity that will assist me in representing the Guyanese people.”

He personally believes too that he was included on the PPP Civic’s list because he is emblematic of the change the Party would like to see which the involvement of more youths in the decision making process.

Ramson, who has addressed several public meeting across the country over the last two months,  rejected the opposition’s criticism that he PPP list boasts of nepotism and asserted that it only becomes a concern when there is lack of capacity. Ramson even accused the coalition of being hypocritical on the issue.

The young attorney wants voters to consider the ruling party’s track record, its competence and vision for the future when they head to the polls on Monday.