Mr. Granger stood before his colleague Heads of State and Government and reminded the UN that Guyana's efforts for the advancement of development in an environment of peace and stability remained challenged by the territorial ambitions of Venezuela. (New York)  Guyana’s President, David Granger, grabbed the attention of the full United Nations General Assembly (UNGA) as one of the first five Heads of State to address the gathering during the first day of the General Assembly Debate on Tuesday.

Mr. Granger stood before his colleague Heads of State and Government and reminded the UN that Guyana’s efforts for the advancement of development in an environment of peace and stability remained challenged by the territorial ambitions of Venezuela.

“I am constrained to state, however, that all our efforts – nationally, regionally and globally – for the advancement of development in an environment of peace and stability are being challenged by the territorial ambitions of our neighbour, the Bolivarian Republic of Venezuela”, the President said.

He said Venezuela claims to Guyana’s territory strike at the heart of the United Nations and pleaded with the international community to understand Guyana’s plight.

Mr. Granger said since last year, Venezuela  has stalled and intensified its  aggression against Guyana and thwarted all of the Secretary-General’s efforts to pursue ‘a way forward’ – at least in terms of a process that promises final resolution to the controversy.

He said Guyana stands ready to have the International Court of Justice determine the matter with finality.

“We will work resolutely with the Secretary-General in his final months in office to free Guyana, and his successor, from this surreal burden,” he added.

But the Guyanese Leader said, still, it defies his every effort to fulfill that commitment. 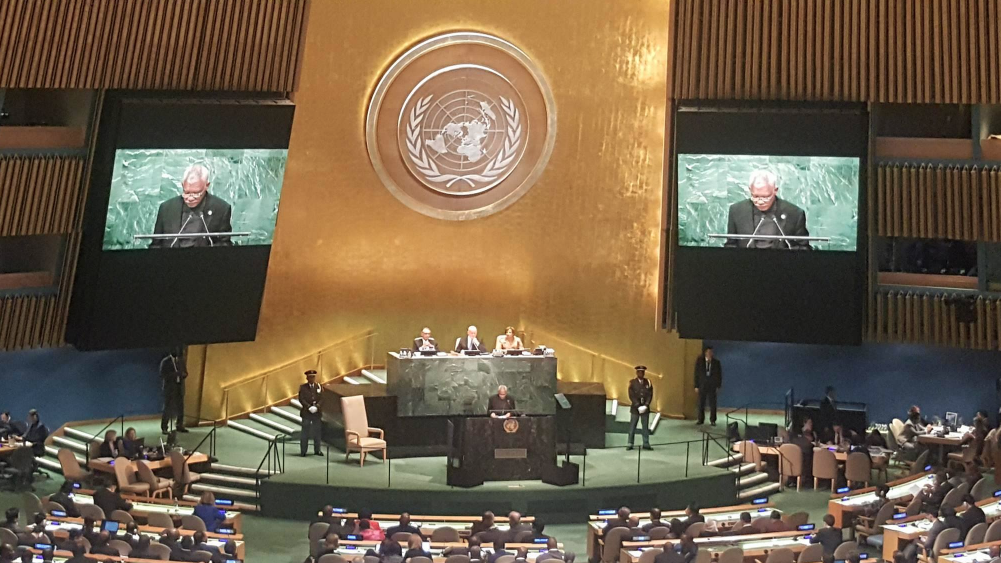 Mr. Granger noted that Guyana must look to the United Nations for  protection against threats to its security, for intervention for peace and for respect for international law.

” My plea for international understanding of our plight has nothing to do with Venezuela’s internal situation. The ordinary people of Venezuela are our sisters and brothers. Their agonies touch our hearts and we wish them early relief from their ordeal,” he added.

Granger said Venezuela’s claims, however, are a threat to Guyana’s existence as an independent nation.

“They are a scandalous revival of the conquistadorial disease that once plagued its own history.  They are a crime against our humanity, clothed in the verbiage of national honour,” he added.

The Guyanese Head of State told the UN General Assembly that Guyana celebrated the 50th anniversary of its Independence this year but said that the anniversary was regrettably acknowledged by Venezuela through its repudiation of a border treaty it had signed over 1117 years ago and ratified and respected for 60 of those years.

“I addressed this Assembly last year and warned of the danger Venezuela posed to the peace and security of our region not by its internal instability but by its external assault on Guyana’s sovereignty and territorial integrity. I placed hope in the fact that the process for final resolution of Venezuela’s unworthy territorial claims rested now in the hands of the Secretary-General of the United Nations,” Mr. Granger informed.

Guyana is pushing for a juridical settlement to the border controversy and the President is hoping that the UN Secretary General puts systems in place to lead to that direction before he leaves office later this year.

Guyana has complained to several other international bodies about Venezuela’s constant threats and claims.