The President made it clear that the Government is not inclined to usurp the authority of the elected Council nor interfere in the functioning this democratic institution as layed out in the Constitution of Guyana. However, it took heed of the concerns of citizens, so much so, that the issue dominated Cabinet’s deliberations on Tuesday. Nevertheless, he expressed confidence that with dialogue, a mutually acceptable outcome can be achieved. The President made it clear that the Government is not inclined to usurp the authority of the elected Council nor interfere in the functioning this democratic institution as layed out in the Constitution of Guyana. However, it took heed of the concerns of citizens, so much so, that the issue dominated Cabinet’s deliberations on Tuesday. Nevertheless, he expressed confidence that with dialogue, a mutually acceptable outcome can be achieved.

“No one in the Cabinet is opposed to the need for congestion to be eased and for order in the City. We agree that the project could be helpful for raising revenue for the Municipality but only to the extent that it is not harmful to the public good,” President Granger said during the meeting.  The Head of State made it clear that the principled position of his Cabinet is to allow the Municipality to function as it was elected to do and Government will replace one dictatorship with another.  However, he said a way forward that is satisfactory to the Municipality, Government and people of Guyana must be determined.

Emphasising Government’s position following that meeting, Minister of Communities, Mr. Ronald Bulkan said that Central Government, without seeking to dominate or dictate, is merely encouraging the municipality to engage in further dialogue so that consensus can be reached to the satisfaction of all stakeholders. “I think there is a general buy-in on the need for such an initiative because there are many benefits to a project such as this. It helps to restore order to City streets. It helps to reduce pollution. It increases security and it makes traffic management and traffic flow easier. But the main concern is the question of rates. It is considered to be too high, too burdensome and this is a view that I share as well and one that I expressed recently to the Council,” Minister Bulkan said. 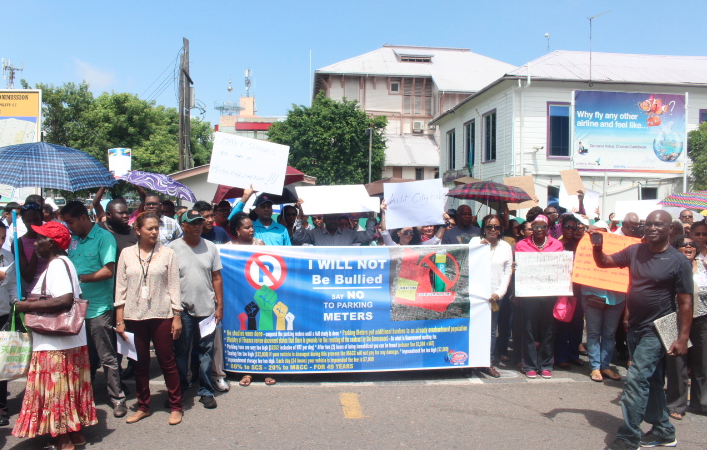 He added that he is pleased that the City Council has already commenced discussions with the the contractor, Smart City Solutions, who were very receptive and willing to consider adjustments to the tariffs to make it less burdensome.

“At the end of the day the new rates that are settled would be far less onerous… When the dust is settled, persons would begin to see and appreciate the benefits that will arise from a measure such as this. Change always comes with some degree of resistance and opposition but change is part of life and one of the things that results in underdevelopment is a state of inertia and indolence,” the Minister explained.

Meanwhile, Mayor Chase-Green informed that the Council is willing to back to the negotiation table and to have further consultations with stakeholders with a view to moving forward. She added that meetings have already been held with the Guyana Teachers’ Union (GTU), which saw the agreement to discontinue paid parking outside of schools, the National Commission on Disabilities (NCD) to ensure that the issue of accessibility is addressed, several private sector organisations for the implementation of special price permits and with citizens, who live in paid parking zones.

Additionally, Government, police and military vehicles, vehicles owned by utility companies and emergency vehicles such as ambulances and fire tenders are all exempt from paying fees to park.

“What we have to look at now is the cries of the people, who are working and have to park for eight to twelve hours. I want them to know that we’ve heard you and we will go back to the table. We will invite you to come in and we will discuss the way forward,” the Mayor said.

She explained that in addition to restoring order in the City, this project was aimed at garnering much needed revenue to pilot the kind of transformation that everyone wants to see. She said that, at present, the Council’s main source of revenue is taxes. Breaking down the expenses, the Mayor said that the actual cost to construct a mile of road is about $20M-$22M and this project will generate revenue of approximately $20M per month.

“If you look at the project in this way, at least we will be able to do significant road works, clear our drains, canals and alleyways to help alleviate flooding. To effectively manage this City, it would take in excess of $4B to $5B per year because of the range of services we offer to the people; the collection of garbage, drainage, roads, street lighting, maintenance of markets and other buildings and our main source of revenue are rates and taxes,” the Mayor said. She also urged citizens to look at the advantages and benefits to be accrued from the parking initiative.