The Summit has been organised by the Private Sector Commission with support from the Inter-American Development Bank. It seeks to encourage collaboration across the political divide with the business community to address challenges to economic growth and expansion. President David Granger, while welcoming foreign investment to Guyana, has called on Guyanese to also take advantage of the investment opportunities available and not become comfortable with investors from outside of Guyana.

“Americans, Brazilians, the British, Canadians, Chinese, French, Indians Russians, and others are all investing in Guyana. Why can’t Guyanese do the same?” he asked.

The President raised the issue, while he was addressing the opening of the 2017 Guyana Business Summit. The Summit has been organised by the Private Sector Commission with support from the Inter-American Development Bank.

It seeks to encourage collaboration across the political divide with the business community to address challenges to economic growth and expansion.

The President said the government is encouraging investment, and while it will not turn away foreign investment, it wants to see more Guyanese businesses.

“Guyanese should have no good reason for not increasing investment in the country,” he added.

Mr. Granger told those gathered for the summit that he remains in full support of the private sector led summit.

He told the gathering at the Georgetown Marriott Hotel that his government has been working to create an environment that supports economic development linked to the objective of ensuring the good life for all citizens.

He said that good life will need to be premised on the absence of poverty, the creation of jobs, the reduction of disparity and sustained creation of wealth, among others.

The Presdient explained that three elements of his government’s approach are in ensuring investment, innovation and the creational of an institutional framework for economic development.

He noted that private sector investment is critical, as the government continues to encourage investment by ensuring a stable macroeconomic environment.

The President said the economy is being rebalanced by investment in small, medium and micro business.

“The government sees development in a holistic way. Horizontally across all regions and vertically from the household to the big corporations.” 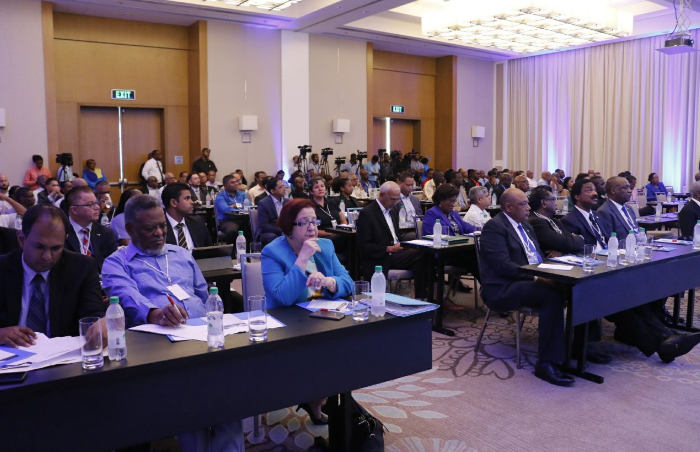 Mr. Granger explained too that as part of his broad commitment to ensuring a better quality of life, the government will continue to encourage investment and enhance competitiveness.

He said the private sector must take advantage of the opportunities and use its expertise to drive the development, adding that the government looks to the private sector as a partner in the generation of wealth and creation of jobs.

But moments before President Granger delivered his address, he was called upon by the Chairman of the Private Sector Commission, Eddy Boyer, to clarify his government’s economic policy.

Boyer’s address was delivered by A PSC representative, as Boyer is currently seeking medical treatment overseas.

In that statement, the Chairman said the Government over the next two days, needs to clarify its approach to economic development.

The PSC also wants clarity on the government’ s taxation policy, how it intends to strengthen democracy and the rule of law, and improve the quality of life for all citizens.

The PSC also wants the government to outline its plan for the creation of jobs and for it to also provide direction for the oil and gas sector.

It was noted that the conference is not an attempt to solve all the problems of business, but rather to continue the journey started many years ago, to achieve desired goals of sustainable business development.

The PSC has pledged to work with the government, but in the process, called for investor’s confidence to be maintained.

The Private Sector Commission believes that over the next two to three decades, with the growing oil and gas sector, Guyana will become an economic powerhouse, “possibly the Dubai of the Caribbean”.

However, it wants the government to be careful and ensure that the country does not become a resource-rich country with a poor population.