President tells OP staffers to be professional and efficient Addressing staffers at the Presidential Complex, President David Granger, two days after taking office, reminded employees that the entity is a very important branch of the public service and the hub of government, hence, it is very important that it functions efficiently.

He reminded them of the oath he took on May 16 when he became President saying, “I am not being sworn in as leader of APNU/AFC, I am being sworn in as President of the Co-operative Republic of Guyana. If I could have a public conscience, or public vision, or public sense of vision, I would expect all of you to have that vision”. 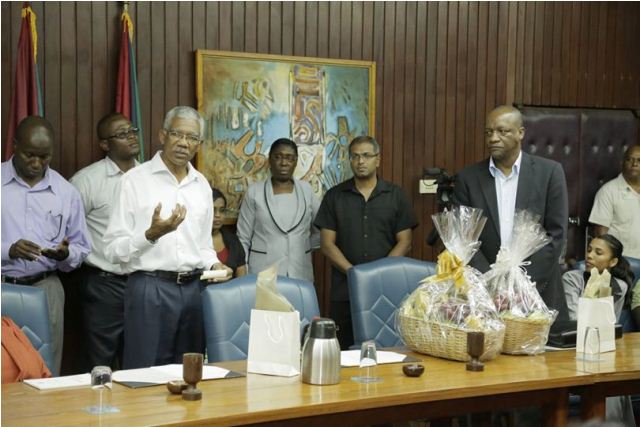 He pointed to the fact that while everyone is biased, the degree of their professionalism is determined by their ability to suppress that bias.

In whatever field persons work, the first thing is professionalism, President Granger reiterated, noting that their Office of the President jobs are determined by their expertise. He explained that professionalism also is based on a sense of solidarity and, “We’re all working here together, we’re not working at daggers drawn… So in any group of professionals there has to be a sense of solidarity. If you don’t possess that solidarity, well then we will fail in our duty.”

Staffers were also reminded that, “Parties come, (and) parties go,” and asked that all stakeholders put behind them all of the acrimony and antipathy of the past week or the past years. “I would like us to look forward to a Guyana which is respectful of all of the people”.

Today’s meeting was one of several that President Granger had on his schedule as part of the transitioning phase of taking the reins of government, and ensuring the smooth continuity of the administration of the nation. (GINA)