The Ministry of Finance has dispatched a circular to the heads of all budget agencies informing them of the Government’s approval of wages and salary increases for public servants.

Public servants who earn over $1 million per month will get an increase in their salaries of 0.5%.

The increases will be retroactive to January 1, 2018 and the Finance Minister intends to seek cabinet’s approval for the increases to be tax free. The cabinet is likely to make a decision on that before he presents the national budget next Monday.

Members of the Disciplined Services, who are also considered public servants, will get the same increases. However, the increases are not applicable to teachers, employees of the University of Guyana, and Ministers and other Members of Parliament.

The Guyana Teachers Union has already signed on to its own agreement with the Ministry of Education while the salaries for University employees would be addressed by the University’s administration.

Government Ministers and other Members of Parliament got an increase in their salaries just after the new government took office and that was a one off increase for the entire five year term of the government.

The Finance Minister has already announced that public servants could expect salary increases in 2019 and 2020. 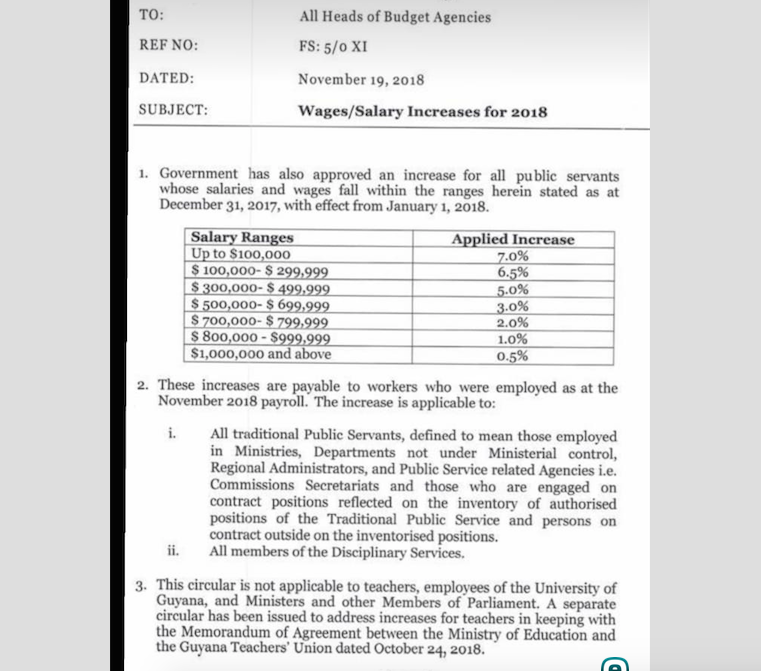