The Guyana Coast Guard is now better equipped to traverse the country’s many waterways, thanks to the donation of three Metal Shark jet boats by the United States.

The boats which are fitted with state of the art equipment are valued at US$1.7 million and  are the first U.S.-built boats that will be used by the Guyana Defense Force’s Coast Guard.

U.S Ambassador to Guyana, Brent Hardt said similar vessels are currently in service around the globe with the United States Navy and Coast Guard.  “In addition, the boats come equipped with state of the art communications capabilities to ensure timely sharing of information and operational coordination”, he said at the handover ceremony for the new boats at Coast Guard headquarters.

The donation falls under the commitment of the United States to assisting Guyana with security issues. It also represents part of the US Government’s ongoing support for the Caribbean Basin Security Initiative.

The U.S Ambassador said the handover of the Metal Shark vessels marks the beginning of a new chapter in Guyana-United States relations as “we deepen our work together to combat transnational organized crime, ensure freedom of commerce and navigation on inland waterways, and, most importantly, ensure the safety and security of the people of Guyana.” 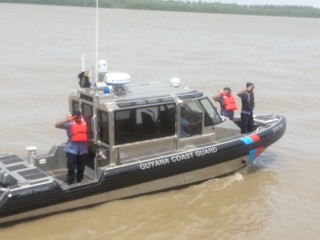 He noted that already in preparation for the handover, U.S. and Guyanese military forces have been conducting training in the operation and maintenance of the vessels and in marine patrols and interdiction.  “And this commitment will be ongoing.  Follow-on training will be conducted by various U.S. military teams to ensure that the Guyana Defense Force remains poised and ready to respond to any crisis”, the Ambassador said.

He noted also that the boats will be used by Guyana to continue the fight against drug trafficking noting that illicit trafficking destabilizes economic progress, threatens public safety, and makes it more likely that vulnerable populations may be lured into criminal organizations.

According to Ambassador Hardt, transnational trafficking has emerged as a major threat to governance and security throughout the Caribbean, as the flow of drugs, arms, and even people generates large profits for criminal networks that in turn distort economies and undermine the rule of law, making it harder for countries to reach their national social and economic goals.

President Donald Ramotar thanked the U.S Government and the Ambassador for their ongoing commitment to Guyana and to helping Guyana take on its security challenges. He said the United States and Guyana have shared a long and close relationship over the years especially when it comes to security matters. He challenged members of the Coast Guard to take good care of the new boats as they will play an important role in tackling many of the crimes that take place on the waterways.

Under the Caribbean Basin Security Initiative, the US government has offered similar support to a number of Caribbean nations and they routinely share security information with each other and support each other in tackling trafficking crimes across the region.