The confirmation of the accreditation of Ambassador Miles was reported to the National Assembly on Thursday by Foreign Affairs Minister Carl Greenidge following inquiries from the opposition People’s Progressive Party. The Government of Venezuela on Wednesday accepted the credentials of Guyana’s new Ambassador to Venezuela, Ms. Cheryl Miles. Guyana has been waiting several months for the acceptance.

The acceptance came on the same day of the 50th Anniversary of the conclusion of the Geneva Agreement Britain and Venezuela as Guyana was moving towards becoming an independent state. That agreement ended Venezuela’s arguments that Britain should have continued holding Guyana as  colony until Venezuela had completed its claim to Guyana’s territory. That claim ended back in 1899.

The confirmation of the accreditation of Ambassador Miles was reported to the National Assembly on Thursday by Foreign Affairs Minister Carl Greenidge following inquiries from the opposition People’s Progressive Party.

Mr. Greenidge said Ambassador Miles was accepted by the Venezuelan Minister of Foreign Affairs on behalf of President Nicolas Maduro.

Ambassador Miles who is a career diplomat and former Head of Guyana’s Foreign Service was selected as the new Ambassador to Venezuela just after the coalition government took office in May 2015.

It was during the month of May that Venezuela launched another round of claims to Guyanese territory and maritime space. Guyana has been strongly defending its territory and wants a judicial settlement to the controversy.

Miles has been in Venezuela for the past few months as Guyana and Venezuela turned to the United Nations for several meetings. 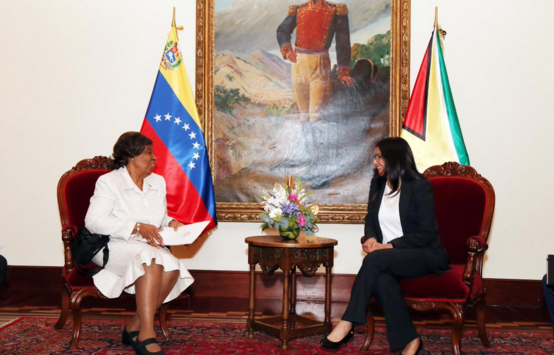 President David Granger has been rallying the international community in Guyana’s corner. He is scheduled to meet with UN Secretary General, Ban-Ki-Moon on the issue this week.

Meanwhile, Guyana’s opposition, People’s Progressive Party called on the government to also ensure that other Heads of Missions are finalized and accredited to the nine outstanding missions.

Former Foreign Affairs Minister Gail Teixeira told the government that these persons should include young persons and not persons in their 80’s and 90’s. Greenidge insisted that there was a need for caliber and experience in these appointments.