The recently formed Youth Action Network moved into the mining town of Linden on Saturday morning to launch their first set of community projects.

The new Youth Action Network was formed by the United States Embassy in Georgetown and has brought together three youth groups from across Guyana and a number of young leaders. The initiative aims to give the embassy a better understanding of issues of concern to Guyanese youth while supporting various projects across the country that could impact on the lives of youths.

On Saturday, the Youth Network joined forces with some visiting U.S Military cadet officers and together they took on three projects in Linden as part of its outreach community programme. 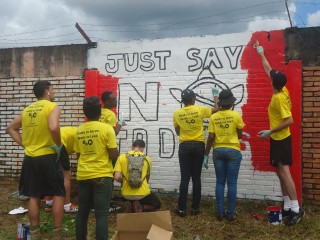 One of the project entailed the painting of murals on the brick fence of the Mackenzie Sports Club ground, the second supported the restoration of a play field in the small community of Retrieve in Linden and the third project took place at the Bayrock Community Centre ground and involved the playing of sporting activities between the volunteers and youths from the community.

The Mackenzie Sports Club Ground is Linden’s premier sporting facility. The facility boasts a football field, a basketball court and a swimming pool and has served the people of Linden for decades as their main venue for recreational activities and sports events.

The volunteers painted positive and uplifting messages as murals along sections of the fence of the ground on the inside and outside.

United States Ambassador to Guyana Brendt Hart visited the sites at Linden and told News Source that he was extremely pleased with the involvement of the young people in the project that was undertaken by the Embassy and that is part of a global programme by the U.S Department of State.

Mr. Hart said “we are very excited by this, we have been working with a number of youth groups and youth ambassadors and this is something that has been a State Department programme throughout the world”.

One year ago, the community of Linden was the centre of protest action over a move to increase electricity rates in the community. The Ambassador said he was pleased to see the community bouncing back and playing a part in the U.S Embassy project. 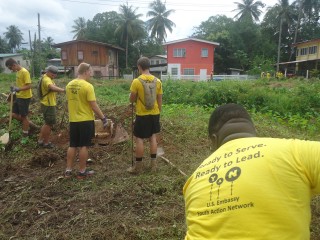 Over in the Retrieve area, the community had already started its own restoration project when the Youth Action Network became involved in the restoration of a play field in the area. A number of residents came out to join in the clean up and restoration effort.

The Head of the Retrieve Restoration Committee, Mrs. Gloria McKinnon told News Source that a few months ago, community members formed the committee to start a number of clean up and beautification projects. She said she was very grateful for the help that came from the youth project.

Among the youth groups that form part of the Youth Action Network is the Youths For Guyana group which has been leading the way in Georgetown with a massive Keep  Guyana Beautiful project.

The President of the Youths for Guyana group, Orin Phillips said joining forces with other youth groups and becoming a member of the Youth Action Network is a “big step forward” for his group.

He said when his organisation got started close to two years ago, there were only three members. It has since blossomed into one of the leading youth organisations in Guyana with a growing membership that has already passed one hundred.

Several other projects and initiatives are expected to come on stream as part of the Youths Action Network project. The project is expected to offer training to youths in several areas including leadership.

It will also seek to foster closer ties between young people across Guyana and will offer the young leaders the opportunity to visit similar programmes and initiatives in the United States and return to serve with the experience they would have gathered. 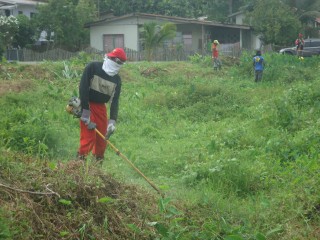 2 Responses to "YAN moves into Linden with community projects"