The two opposition parties which currently hold the majority in Guyana’s National Assembly have decided to join forces as one united front to take on the governing People’s Progressive Party at the upcoming May 11, 2015 elections.

The two parties announced their match at a Valentine’s Day press conference at the Georgetown Club. The leaders of the party were not dressed in red and white but they told media operatives that it was time for them to unite to ensure a better Guyana.

The agreement that the two have signed onto is known as The Cummingsburg Accord. Under the agreement the APNU will hold the Presidential Candidate position while the AFC will get the Prime Minister Candidate position. The parties will also introduce the Vice President positions and three persons are expected to be appointed to these positions. The APNU will get one vice president while the AFC will get two vice presidents.

SEE Details in Joint Statement below:

JOINT STATEMENT from APNU and AFC announcing The Cummingsburg Accord

Following weeks of intense high level negotiations the APNU and AFC have arrived at an Accord title the “Cummingsburg Accord” which has been signed by both parties February 14, 2015.

This accord is in respect of their participation in the May 11, 2015 General and Regional Elections In the interest Guyana and responding to the overwhelming encouragements of both parties membership, supporters and the general public at large; the parties have agreed to the following. 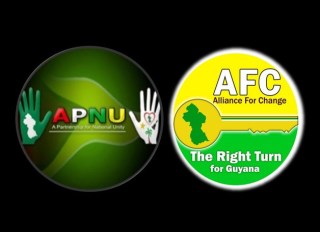 The AFC is assured of 12 seats in the National Assembly (Parliament)
In the construct of a new government the APNU will be allocated one Vice President and AFC two Vice Presidents both of whom will be members of the Cabinet.

In reflecting the thinking and commitment to and for future constitutional reform it has been agreed that the Presidency will be reorganised along the following lines;
1)- The President as Head of State, Head of Government, Commander-in-Chief of the Armed Forces and shall have responsibility for; the appointment of Constitutional Agencies and Commissions with the required and agreed democratic mechanisms of consultation and appoint.

The President will delegate the following responsibilities to the Prime Minister;
1)- Domestic national Affairs and Chairing Cabinet;
2)- Recommending Ministerial appointments and providing the organizational structures of Ministries for the approval of the President;

3)- Appointment of Head of Agencies and Non-Constitutional Commissions with the required and agreed democratic mechanisms of consultation and appoint;

4)- Domestic Security (Home Affairs)
The Parties further agree that Cabinet positions will allocated on a 60/40 basis between the APNU and the AFC respectively.

This is a historic and watershed political development for our country as this new electoral alliance moves to put Guyana on the correct path, where all Guyanese regardless of ethnicity can feel fully motivated to be proud of his or her nation and is afforded the opportunity to make a meaningful contribution to the society while successfully caring for themselves and family.

These discussions were not easy and both parties had to give up some of their demands and overcome decades of prejudices for us to have arrived at this most significant and momentous point of national renewal.

The work has just began and we have no time to lose, starting immediately the General Secretaries of both parties will commence the process of combining our campaign teams into one unbeatable electoral machine to secure the victory this country urgently demands of us.

The leadership of both APNU and AFC pledge here today to lead our beloved country into a new dawn of national development, transparent governance, full accountability and invite all well thinking Guyanese to join in this important march as we give Guyana a second chance and to ensure you are on the right-side of history, “We ready for the VOTE”

2 Responses to "APNU and AFC join forces for 2015 Elections"