Norton has endorsed Joe Harmon for the position of Party Chairman.  Harmon will be up against the incumbent, Basil Williams and current Vice Chairperson, Volda Lawrence. Days before delegates of the People’s National Congress Reform meet to vote on the party’s leadership, former General Secretary, Aubrey Norton, has jumped into the Vice Chairman’s race.

In an announcement on his Facebook page this evening, Mr. Norton said his decision is based on the request of many of his party comrades.

His decision to enter the race for Vice Chairman has shaken up the race. Up until now, all of the other Candidates came from the younger side of the party.  Christopher Jones, Thandi McAllister and Annette Ferguson were the candidates who were busy campaigning across the country. All three are in their 30’s.

Norton is in his 60’s but also brings a wealth of experience to the party that he has served as a member for decades. 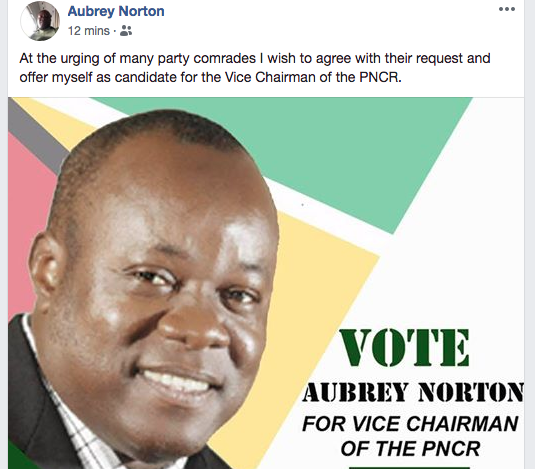 But political watchers have also been pointing out that the job of Vice Chairman is a serious one and there is a need for a senior and experienced politician in both the Chairman and Vice Chairman position as the party heads into elections in 2020 as the largest party in a coalition.

Norton has endorsed Joe Harmon for the position of Party Chairman.  Harmon will be up against the incumbent, Basil Williams and current Vice Chairperson, Volda Lawrence.

President David Granger is unchallenged for the position of party leader. The PNC’s Congress opens on Friday at Congress Place and will run for the rest of the weekend.