Acting Chief Justice Ian Chang has ruled that Leader of the Opposition David Granger be excluded from the budget cuts trial since the Constitution of Guyana prevents any Member of Parliament from being sued.

The Government of Guyana through the Attorney General had named The Speaker of the National Assembly, the Leader of the Opposition and the Minister of Finance in its lawsuit to deem the  budget cuts unconstitutional. The Chief Justice has also excluded the Minister of Finance from being a party to the matter on the same grounds that he too as a Member of Parliament cannot be sued.

The ruling in effect leaves the entire case between the Attorney General and the Speaker of the National Assembly. On Wednesday, Attorney for the Opposition Leader Basil Williams tried to convince the Chief Justice that the ruling was wrong and that he had misinterpreted the constitution. Williams’ position is that since the Leader of the Opposition was named in the matter, he ought to have been given the opportunity to cross-examine the Government’s point man in the matter, Dr. Roger Luncheon who is the Head of the Presidential Secretariat and the Secretary to the Cabinet. 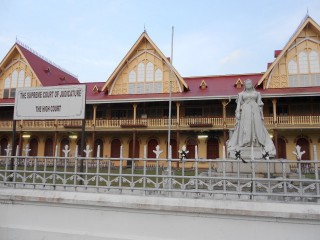 Williams believes that the Government ought not be allowed to make serious accusations about the impact of the budget cuts and the Leader of the Opposition not be able to defend the Opposition’s position in the matter.

He said although the Speaker of the National Assembly will be able to have a say in the matter, that might be limited based on the position that he holds and his interest as Speaker in the matter.

The Attorney told the court that the Speaker is also a Member of the National Assembly and if the court wants to rule that Mr. Granger cannot be a party in the matter because he cannot be sued, then the same law ought to cover the Speaker. Chief Justice Chang disagreed and became agitated as Attorney Williams made his point. At one stage during the hearing, the Chief Justice shouted that he had made a decision and a ruling and that it was final.

Williams later told reporters outside the Courtroom that he did not agree with the Chief Justice’s ruling, pointing out that “several other cases came with Mr. Granger as the defendant and were determined”. He said now that the trial with regard to the budget cuts is about to begin, the rules have suddenly changed.

“Now that the trial is about to begin and now that Dr. Luncheon is to come up for cross-examination, the Attorney General seeks to hide him and says that he would need affidavits evidence, but the witnesses must come. So by  pulling out Mr. Granger at this stage is really preempting Mr. Granger and there is now nobody left to call for Luncheon to be cross-examined in the case,” Williams said.

The Attorney who is also a Member of Parliament for the APNU and Chairman of the People’s National Congress made it clear that he was not happy with the decision of the Chief Justice, repeatedly pointing out that Dr. Luncheon should be questioned about all the claims he made in the court documents about the impact of the budget cuts.

Attorney General Anil Nandall did not appear too worried about the ruling by the Chief Justice. Mr. Nandlall said the Chief Justice has made it clear in his ruling that Members of Parliament have immunity and therefore the Leader  of the Opposition and the Minister of Finance should have never been named as parties in the matter. Nandlall added that the important thing is that there  has now been an agreement in the court that there will be an agreed statement of facts which will form the facts of the matter. He said cross-examination in the case is unnecessary.

“The legal issue is a simple one. Does the Opposition have the power to reduce the estimates as presented by the Finance Minister. Having cross-examination of Dr. Luncheon would be a complete waste of time”, the Attorney General said.

The Attorneys are expected back in court in early July to present their statement of facts in the matter which will lead the way for the Chief Justice to make a final determination in the budget cuts case that started since 2012 following the Opposition’s decision to slash the estimates as presented in the 2012 National Budget.