The United States Embassy in Georgetown on Wednesday announced that U.S Secretary of State John Kerry has recognized President of the Guyana Women Miners Organization (GWMO) Simona Broomes as one of the 2013 Trafficking in Persons (TIP) Report Heroes.

Broomes who has been very outspoken against human trafficking in Guyana especially in the  mining districts rescued a number of teenage girls from a mining camp in Guyana’s interior. The young ladies were being used as sex slaves.

According to the U.S Embassy statement, at the June 19 TIP Report roll-out event, Secretary Kerry paid special tribute to the 2013 TIP Report Heroes who are men and women “whose personal efforts have made an extraordinary difference in the global fight against modern slavery”

“Every year, the Department of State honours individuals around the world who have devoted their lives to the fight against human trafficking”, the statement added.

It added that the persons who would be honoured are Non Governmental workers, lawmakers, police officers, and concerned citizens committed to ending modern slavery.  “They are recognized for their tireless efforts – despite resistance, opposition, and threats to their lives – to protect victims, punish offenders, and raise awareness of ongoing criminal practices in their countries and abroad.  In 2013, nine people were chosen as TIP Report Heroes in the Fight against Modern-Day Slavery”, the statement noted.

The U.S Embassy said Guyana’s Simona Broomes was selected from among the many impressive nominees from around the world.

According to the U.S Embassy, “Simona Broomes has demonstrated extraordinary bravery and leadership in raising the awareness of human trafficking in Guyana.  After 25 years as a miner, she established the Guyana Women Miners Organization in 2012 to empower women miners and address unique challenges women face operating in remote areas.” 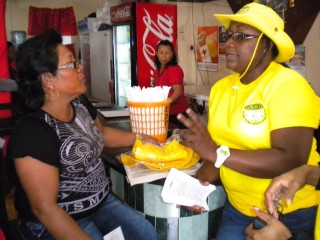 It said “Ms. Broomes has rescued several trafficking victims, and her organization provides temporary housing for victims to ensure their safety.  Under Ms. Broomes’ dynamic leadership, the GWMO and its 440 members take direct action to protect victims and have become consistently powerful advocates against human trafficking.  From a small group of women banding together to solve common challenges, the GWMO has become a recognized force in combating trafficking in persons and promoting equality and economic opportunities for women in Guyana.  Ms. Broomes is a consistently powerful, vocal advocate against TIP and continues to take direct action – often at great personal risk – to protect and assist victims of trafficking.”

In addition to the TIP award activities in Washington, D.C., Ms. Broomes will participate in an International Visitor Leadership Program (IVLP) exchange which began on June 17 and will wrap up on June 26, 2013, entitled “2013 Trafficking in Persons (TIP) Report Heroes.”

The IVLP is the premier professional exchange program managed by the Department of State’s Bureau of Educational and Cultural Affairs for the purpose of fostering mutual understanding between the United States and other countries, through program events and visits that reflect the professional backgrounds of the participants.

The Georgetown Embassy noted that the exchange program will provide an opportunity for Ms. Broomes to travel to U.S. cities outside of Washington for meetings with American counterparts engaged in combating trafficking in persons.

“The project will offer her local perspectives on this global problem, cultural experiences, as well as the opportunity for informal dialogue with fellow TIP Heroes.  It is our hope that the experience will be valuable for Ms. Broomes as she continues to engage the Government of Guyana, law enforcement authorities, the international community, local communities and the media to bring public attention to human trafficking, while advocating for improved monitoring, education, counselling, and law enforcement interventions”. the statement concluded.