Cricketer Carlyle Barton who was caught on tape allegedly shooting his friend Shawn Nelson to death, walked out of the Georgetown Magistrates Court a free man on Tuesday morning after Magistrate Fabio Azore ruled that no prima facie case had been made out against the young cricketer. The incident took place in May on Orange Walk, Bourda Georgetown and was captured on nearby surveillance cameras.

The Demerara club cricketer was charged with the man’s death after video recording surfaced showing the entire incident and he was identified as the shooter.

Tuesday’s ruling came as a shock to most relatives of the dead man, who feared that the case was going to take this turn after several  of the eyewitnesses and the police investigators who handled the case refused to turn up in court to give evidence against the young man on several occasions.

On a number of occasions, the witnesses in the matter were a no-show. Police officers who should have entered evidence were suddenly unavailable on the court dates. 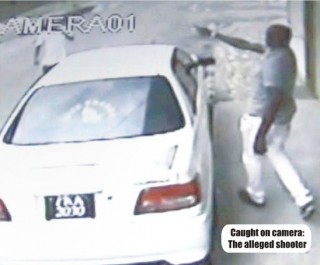 The video which was carried on one of the nightly television newscasts in Georgetown showed the former defendant whipping the gun out of his side as he walked towards his car, cranking it then firing a shot at Nelson who was approaching from the opposite direction on the other side of the car.

Nelson fell to the roadside just next to the parked car. The shooter fumbled with his car door before calming jumping into the car and driving away from the scene. He surrendered to police the same day after crashing the car into a power pole. The two men were known to each other and had no problem.

The video recording was never entered into evidence because the investigating ranks never turned up in court to make it apart of the evidence in the case.

Under the laws of Guyana, the Director of Public Prosecution could re-institute the murder charges against the cricketer. It is unclear whether that will be done in this particular case.

Some of the dead man’s relatives are already calling for a full investigation into the way the case was handled by the police and the prosecution and the non-attendance of key witnesses in the matter.

8 Responses to "Cricketer walks free of murder charge following no show by witnesses."