At his first press conference since taking up office three months ago, Dr. Bynoe explained that the Department has been undertaking several activities and initiatives to ensure a better managed sector. The recently established Department of Energy in the Ministry of the Presidency has made a move to design a model contract for future Production Sharing Agreements for the oil and gas sector.

That revelation was made today by the Head of the Department of Energy, Dr. Mark Bynoe.

At his first press conference since taking up office three months ago, Dr. Bynoe explained that the Department has been undertaking several activities and initiatives to ensure a better managed sector.

“We’re designing a new model contract that will be used for future PSAs as well as elaborating a model tool kit to allow probabilistic scenario modeling of current and future PSA contracts. The Department recognises the need for strong legislative framework, but in doing so, it understands the need for us to first review where we are. In keeping with this, the Department is reviewing the current legal and regulatory framework for the petroleum sector, inclusive of the 1986 Petroleum Act”, Dr. Bynoe said.

The Government has come under criticism over the current Petroleum Sharing Agreement with ExxonMobil and other companies involved in the oil sector. There have been calls for Guyana to put better and stronger measures in place for such agreements.

When questioned by News Source about what may have triggered the need for model contracts to be developed, Dr. Bynoe explained that contracts evolve with time and situations and circumstances continue to change. 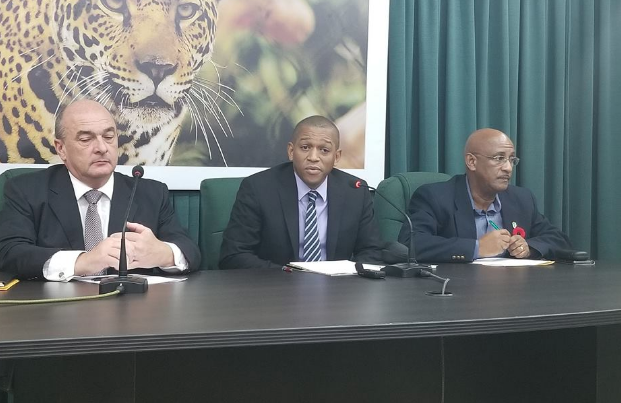 “What we are aiming at, is to look at what currently obtains and to build on that. I am not in a position to speak to the exact deficiencies, but thats why we are bringing in the requisite expertise to advise”.

He said across the world, model contracts evolve over time and this is the right time to evolve the contracts.

Mr. Wilks explained that when looking at model contracts in other parts of the world, it also important to contextualize different areas of the world.

With regard to the renegotiated ExxonMobil contract, which was done in 2016, Dr. Bynoe said in hindsight is always 2020. He said Guyana has to learn as it moves forward and ensure there is always maximum value for Guyana.

The Department of Energy was established back in August as the President shifted the responsibility for the petroleum sector from the Ministry of Natural Resources to his own office.

He has said that the Department of Energy is expected to eventually become a full Government Ministry, but at its current stage, it is sourcing experts and putting systems in place as Guyana prepared for entry into the global oil sector.