During the renaming ceremony, Guyana’s Minister of Public Infrastructure, David Patterson announced that the concerns of those who were opposed to the renaming have not fallen on deaf ears and the concerns will not be ignored. The new name was unveiled on Monday afternoon during a small ceremony at the East Coast Demerara facility.

The renaming is in recognition of the contributions of one of Guyana’s first Ministers responsible for aviation, Eugene Correia.

During the renaming ceremony, Guyana’s Minister of Public Infrastructure, David Patterson announced that the concerns of those who were opposed to the renaming have not fallen on deaf ears and the concerns will not be ignored.

He said a review of the lease agreement for the airport and its management is currently being done and he noted that while the airport may be privately managed, it remains a government facility.

“What might have worked a decade ago may not be what is best for today and therefore a review is being done of the operations of the Ogle Airport Inc. In particular, the Government of Guyana is focusing on its current lease of the facility to OAI. Presently, there is an independent legal firm looking at the lease; I give my firm assurance that this separate exercise will be done transparently and the renaming of the airport will not affect the outcome or direction of Government in this matter”,Patterson said.

Minister Patterson also noted that the government intends to become more involved in the airport to ensure the standardisation of operational procedures and equal opportunities to all who are involved, adding that “while I acknowledge that OAI is a private company, it is however managing a government asset. As such, its management should be dealt with in an equitable manner and this is a commitment that I give on behalf of the Government of Guyana. Whether it is through the redesign of the company’s website or the construction of a shorter taxiway for the majority of the operators, we will work with all stakeholders to ensure that a satisfactory consensus is reached”. 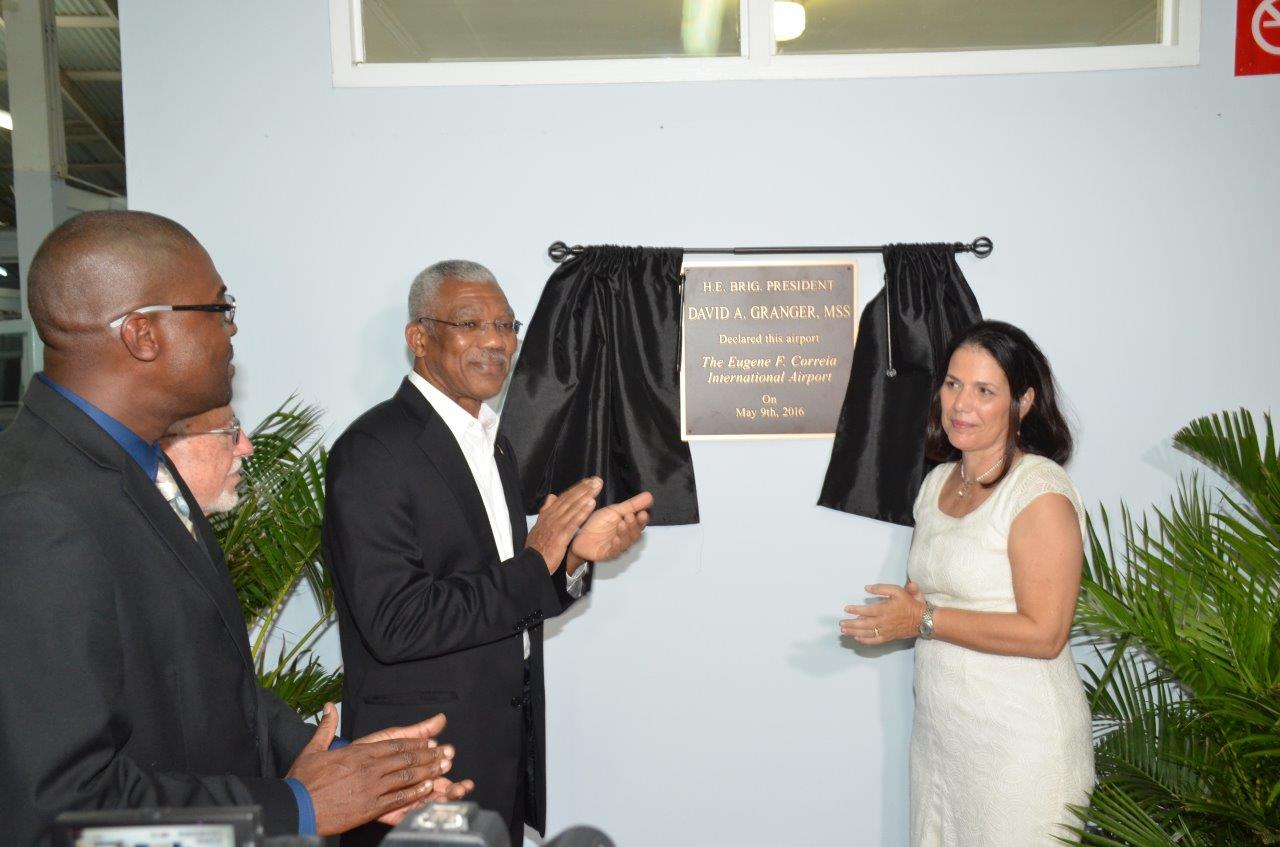 President David Granger in his address said he was not lobbied or coerced into the name change and wanted to recognize the contributions of an outstanding Guyanese in this Golden Jubilee year of Guyana’s Independence.

The President said that as a visionary, Eugene Correia spoke in favour of the then Hydro-Electric Power Bill and predicted that water power would play a major role in developing Guyana. President Granger said that 60 years later that vision and his conviction at the time still ring true.

Mr. Granger said that Correia also played a significant role in the struggle for Independence. He told the gathering that Correia was a member of the delegation to the Constitutional Conferences held in the United Kingdom in 1962 and 1963 which led to the change of Guyana’s electoral system to that of Proportional Representation in 1964 and, eventually, Independence in 1966.

A number of the private operators who have opposed the renaming stayed away from the ceremony. Many of them have complained that the renaming could give an advantage to the Correia group of companies which operates an airline out of the airport and other businesses.