Govt. to examine appropriateness of prison in the centre of the city – President says during tour of burnt out Camp St. jail

The visit was unannounced, but the President spoke to News Source as he prepared to leave and explained that the government will now be forced "to go back to the drawing board to determine whether it is appropriate to have in the centre of the city, a facility like this". Two days after the devastating fire and jail break at the Camp Street Prison, President David Granger led members of his cabinet on a visit to the burnt out facility on Tuesday afternoon.

The visit was unannounced, but the President spoke to News Source as he prepared to leave. He explained that the government will now be forced “to go back to the drawing board to determine whether it is appropriate to have in the centre of the city, a facility like this”.

President Granger said the government will now have to determine what type of facility will be needed. He said while he intends to have the issue fully discussed at the cabinet level, he is sure that “we will not have this type of facility here again”.

“The devastation here is almost total and we don’t have any intention rebuilding it as it was before”, he said.

Questioned about the lapse in security that could have triggered the jailbreak and fire, the President said the government was aware of the issues surrounding the Camp Street jail and was at the time, acting on the recommendations of the Commission of Inquiry into last year’s prison fire at the same facility that claimed the lives of seventeen prisoners.

“The administration was actually in the process of expanding the facilities and improving the facilities at Mazaruni when this thing occurred. This is an accident waiting to happen. And equally, I would say that New Amsterdam is a fragile structure too, so we are working as quickly as we could with our limited resources. But at the end of it, I can assure you that the Ministry of Public Security will have a more secured prison that is not susceptible to the types of breakouts that we have been having”, he said. 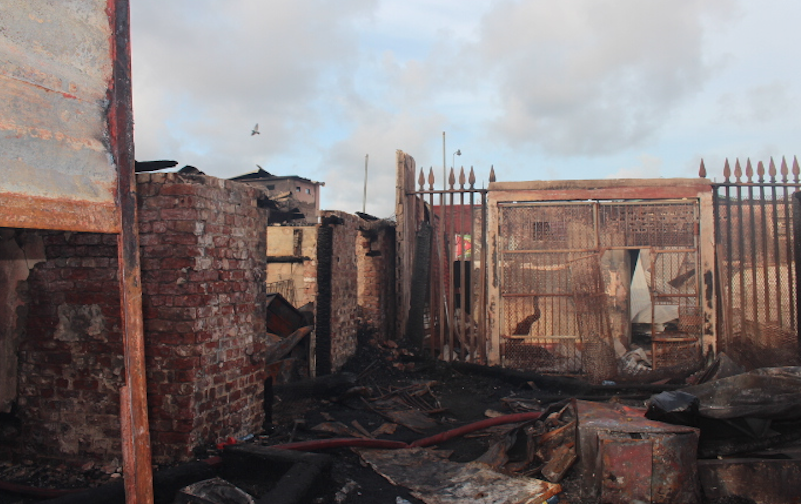 Opposition Leader, Bharrat Jagdeo has bashed the Granger led government over the latest jailbreak and fire at the Camp Street prison. Mr. Jagdeo in a statement on Mondays said the latest incident shows that the government is inept and incompetent.

Pressed for a response to Jagdeo’s criticism, the President said “No. There is no incompetence. As I said we are aware of the fragile nature of these structures which were erected more than 120 years ago and we have done our best in the circumstances.”

Most of the prison buildings were gutted by fire on Sunday during the jail break. Prisoners were moved to the Lusignan prison, but some were eventually transferred to other prisons around the country.

In his address, President Granger said new temporary structures will be constructed to accommodate the displaced prisoners as the authorities continue their hunt for those who escaped.

The Emergency plan will also focus on the completion of a recovery operation to account for and accommodate every single prisoner, implementation of legal measures to immediately reduce the prison population and, importantly, the immediate recapture of the five inmates, who escaped custody.

The President said based on information from the Prison Service, eight prisoners are unaccounted for.