Guyana and Trinidad and Tobago sign “win-win” Memorandum of Understanding

President David Granger told reporters after the signing that Guyana and Trindad and Tobago have always shared good relations and the signing of the new Memorandum of Understanding will only strengthen that relationship. Guyana and Trinidad and Tobago strengthened their relations today with the signing of a Memorandum of Understanding that focuses largely on cooperation in the energy sector, but with focus on other sectors, including security, youth, sport and trade.

The MOU was signed by President David Granger and Prime Minister of Trinidad and Tobago, Dr. Keith Rowley after a more than two hour meeting, that was described as “intense”.

President David Granger told reporters after the signing that Guyana and Trindad and Tobago have always shared good relations and the signing of the new Memorandum of Understanding will only strengthen that relationship.

“We are confident that by collaborating, we will be able to combine the natural resources of Guyana with the entrepreneurial expertise, capital and investment from Trinidad and Tobago. So for both of us, it is a win-win situation and I would say that for the Caribbean community as well, this is a significant step in making the Caribbean community stronger”, the President said.

President Granger also reminded that Trinidad and Tobago has always supported Guyana in its rejection of the the territorial claim by Venezuela of Guyana’s Essequibo region. 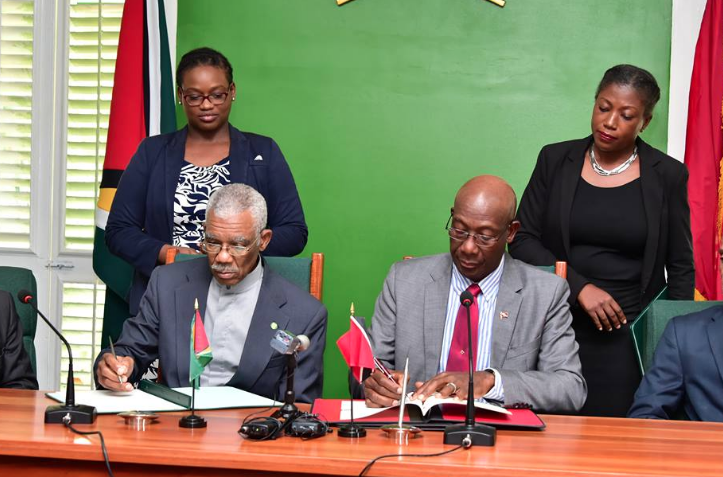 The President said the two countries have always had a fruitful and long relationship and Guyana has always regarded Trinidad and Tobago as a close friend in the international arena.

Trinidad and Tobago’s Prime Minister, Dr. Keith Rowley endorsed the statements made by the President. He said today’s meeting and signing of the Memorandum of Understanding represents “a documentation of our commitment to do more in our neighbourly relations with respect to the generation of economic and other kinds of activities to the benefit of the people of Guyana and Trinidad and Tobago”.

The Trinidadian Prime Minister added that he believes the MoU will lay the groundwork and provide the encouragement for the private sector of the two countries to seize opportunities that are available for both countries. He said that “could only be a good thing”. 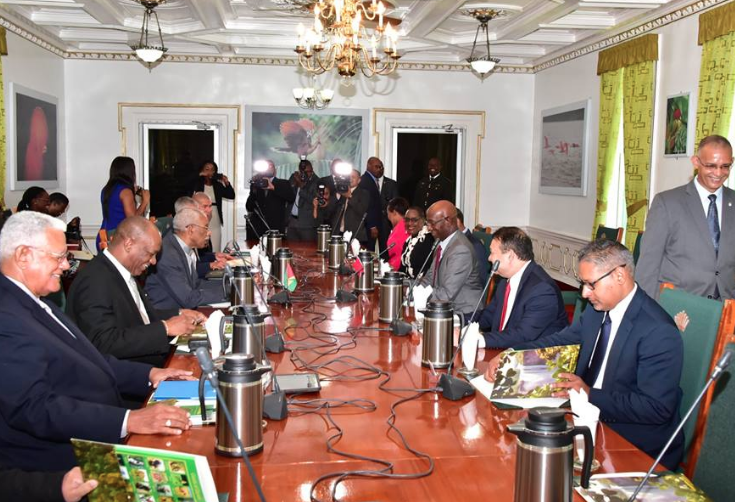 Mr. Rowley disclosed too that the two sides also discussed the existence of “invisible borders in our endeavours and where we should not acknowledge the existence of borders, but to let our effort identify the resources available in each of our countries and to put those resources, whether they be financial, raw material or entrepreneurial skills, to work so as to grow the economy of Guyana and Trinidad and Tobago”.

The Prime Minister said that in moving relations forward, the two countries should not be held back by “bureaucratic impediments”.

He said the two sides also acknowledged that the replacement of the CARICOM Single Market and Economy on the agenda of CARICOM has formed the basis for a unique development.

Prime Minister Rowley will wrap up his visit to Guyana tomorrow and will brief his cabinet on the developments and agreements reached during the meetings with President Granger.

Guyana’s President has indicated that the MoU will be made public and he believes it is one that citizens will agree with and support.