The new Magistrates’ Court in Linden will see the town serving as a new magisterial district. That move was announced on Friday at the commissioning of the Linden Magistrate’s Court, which was constructed under the recently concluded Modernisation of the Justice Administration System (MJAS) at the cost of approximately $60M.

This project was approved in 2006 and implementation began in 2007 through a US$25M loan from the Inter American Development Bank (IDB).

Linden will be merged with Kwakwani and Ituni to form a new magisterial district, which will be called the Upper Demerara River Magisterial District.

The new magisterial district will have its own office where issues such as the obtaining and payment of child support and the filing of court proceedings can be addressed. At present, Lindeners have to travel all the way to Vreed-en-Hoop to access these services.

Delivering remarks on behalf of the Government, Attorney General and Minister of Legal Affairs, Anil Nandlall said that this new edifice is another demonstration of the Government’s commitment to resourcing the judiciary and the justice sector as a whole, in order to ensure that citizens, regardless of their geographic locations, have equal access to facilities that dispense justice. 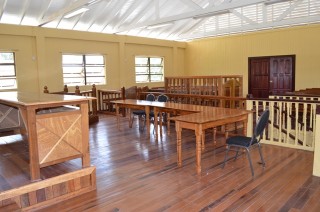 He spoke of the importance of the maintenance of law and order in the country and the need for a mechanism that offers protection to the rights and freedoms of the citizenry. He noted that a country’s social and economic development is intricately linked to the existence of a functioning legal system that protects the liberties of individuals.

“No nation can advance economically, no people can advance intellectually, no society can advance socially if there is no system of laws to protect private property, liberty, life and freedom of thought and other inalienable human rights, and if there is not a system to which one can go to complain when there is an alleged violation of these rights…in the absence of law and order is the presence of anarchy, and in anarchy there is destruction, the complete opposite of progress,” the AG explained.

It is based on these ideological underpinnings that the Government of Guyana has been investing heavily in the legal sector to ensure that as far as possible, its institutions function efficiently to meet the needs of citizens.

He urged the regional administration and the citizens to Region 10 to ensure that the facility is maintained and protected. He lamented that, “many times a lot of public money is wasted because public buildings are not treated in the manner that one would expect them to be treated by members of the public who are largely the sole beneficiaries.”

Chancellor of the Judiciary (ag), Justice Carl Singh said that subsequent to the destruction of the Christianburg Magistrate’s Court in 2011, the Government readily acceded to his request for funds to construct a new building. The land on which this new court is now built was made available by the former regional administration headed by Mortimer Mingo.

In the initial stages of construction there were some hiccups largely due to the intransigence of the contracting firm to which the project was awarded. However, the contractor was dismissed and another was recruited to complete the outstanding works.

The Chancellor reminded that, “we live in a society that is ruled by law and so if you violate the law, if you do not show respect of the law then you will be deemed to be running afoul of the law and there are consequences and it does not matter who you are. The law is a leveller of standing and status.”

He added that it is his intention to ensure that the courts in Guyana provide an effective and efficient system of justice. He said the courts should be seen as a place where the fundamental rights of people are upheld and not just a place for the imposition of punishment for wrongdoing.

In the past, the magistrate who presided in the Region 10 district had to travel from Georgetown. This situation will no longer obtain with this new facility and others like it that are constructed outside of the City. 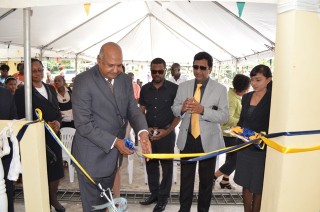 These new courts are equipped with residential facilities so that magistrates can be stationed at various districts and in so doing, deliver at a greater rate of speed, thereby improving the efficiency of the justice administration system.

The Chancellor is currently in discussion with the Guyana Lands and Surveys Commission (GLSC) to demarcate the boundaries for the new magisterial district. He said that once this process is completed, he will make an order declaring the existence of the new district.

Meanwhile, Chief Magistrate (ag), Priya Sewnarine-Beharry called for the speedy appointment of the Judicial Service Commission (JSC) which is responsible for the appointment of competent and impartial magistrates.

In this regard, last month the National Assembly approved the nomination of Justice Lennox Perry (retired) to be appointed as a member of the JSC. The Chancellor and the Chief Justice also sits on this Commission.

Regional Chairman, Region 10, Sharma Solomon said that after the destruction of the Christianburg Magistrate’s Court by fire, it is indeed a proud moment for the Linden community to have restored, a building that represents the face of justice.

“This represents as a community, where we would like to see justice focused in the general spectrum of our region that covers each and every citizen across Region 10…across our divide, be it political, racial and everything that makes us different individuals we must understand that injustice anywhere is a threat to justice everywhere,” Solomon said.

The implementation of the MJAS has seen significant infrastructural development of facilities in the justice sector, particularly the construction of the Magistrate’s Court. There has also been rehabilitation works carried out on the High Court and Court of Appeal buildings.

Additionally, under this programme, new laws have been passed, capacity building for personnel within the sector was facilitated, voice recognition equipment for recording of court proceedings were procured, law reports and the Laws of Guyana were updated and digitalised, and legal awareness campaigns were intensified, all in an effort to improve access to justice in Guyana. (GINA)