Prime Minister Moses Nagamootoo has announced that approximately 80 Guyanese will be flown home from the hurricane ravaged Caribbean islands.

The Prime Minister made the announcement yesterday at the John Fernandes Limited (JFL) wharf when he, along with Minister of State, Mr. Joseph Harmon, inspected four more containers filled with $18 Million worth of relief supplies, which will be shipped to Antigua and Barbuda this weekend.

The companies joined the relief effort by offering the service to Government and the Prime Minister said that he is pleased with the level of private sector support.

“All of them, who we know operate aircrafts on a commercial basis have come forward today to give assistance to make flights available to some Caribbean destinations to bring back an estimate 80 Guyanese who would like to return home, and who cannot afford to do so on their own… We are elated that we are having this type of response from the private sector and the broader Guyanese society,” Prime Minister Nagamootoo said.

The Prime Minister added that Government will provide some aviation fuel for the flights and will work on providing identification documents for those who may have lost them during the storms. The first flight is expected to arrive in Guyana this weekend from the British Virgin Islands.  The body of Mr. Derek Ragnauth, who sadly lost his life as a result of Hurricane Irma, will be returned to Guyana on that flight. 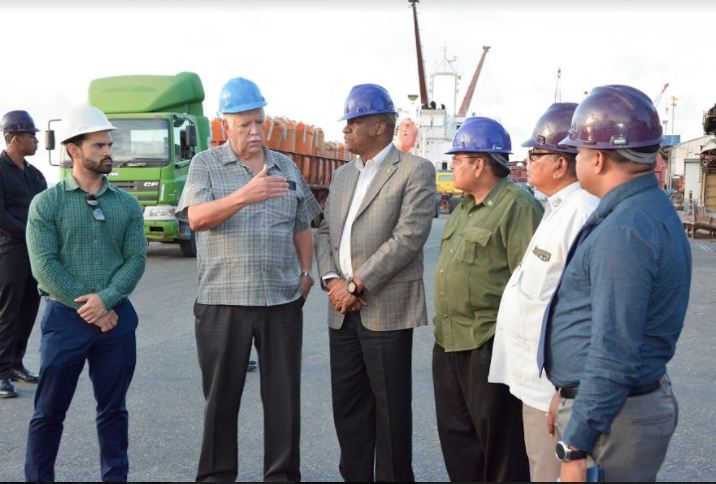 Meanwhile, Minister Harmon, who also echoed the sentiments of the Prime Minister, said that the Government is happy that members of the private sector and ordinary citizens have donated in cash and kind to the local relief effort. “We have always spoken about the cooperation between the private sector and the state sector and this is a really wonderful, a powerful demonstration of us working together for the benefit of those who are in need,” Mr. Harmon said.  The Minister also thanked Mr. John Fernandes for providing shipping services for the delivery of the relief items.

Director General of the Civil Defence Commission (CDC), Colonel (ret’d) Chabilall Ramsarup said that the items, which are being sent in the shipment that was inspected today amounts to in excess of 30 tonnes of food supplies, water and medical supplies . He said that another two containers are currently being packed at the CDC headquarters. “I am hoping that we can get the items to fill it by tomorrow so that we can have it here to catch the line that is leaving on Saturday morning,” Mr. Ramsarup said.

On Tuesday the Minister of State and the Prime Minister had inspected six containers, valued at approximately $20 million in relief supplies. Those containers were shipped to Antigua and Dominica.

In addition to the relief supplies provided by the Private Sector, the Government of Guyana had pledged an initial sum of US$100,000 to the affected countries through the regional disaster response mechanism, the Caribbean Disaster Emergency Response Agency (CDEMA).