Six of the Candidates seeking to represent citizens of the capital on the Georgetown City Council at the upcoming Local Government Elections, shared some of their plans and ideas as they faced off for the first Georgetown Debate at the Theatre Guild on Saturday evening.

The event was organised by Attorney Nigel Hughes and his “Under The Tamarind Tree” company. It invited candidates from the six parties that are contesting in four or more constituencies at the upcoming elections.

The six candidates were asked questions on various municipal and national issues by a panel which represented the media, private sector, civil society and the trade unions.

One of the big issues that came up during the debate was accountability and management at City Hall. The APNU+AFC’s Sherod Duncan made it clear that he does not believe persons sitting on the City Council should be competing for contracts for municipal works and councillors should also not have a private interest in the municipal markets.

Duncan also outlined several ways of raising revenue for the city council. He agreed with other candidates and called for the installation of parking meters in the busy down area as a way of the city getting more revenue. He also proposed the construction of new parking facilities, point out that “we should not just go out but we should go up” with parking facilities. 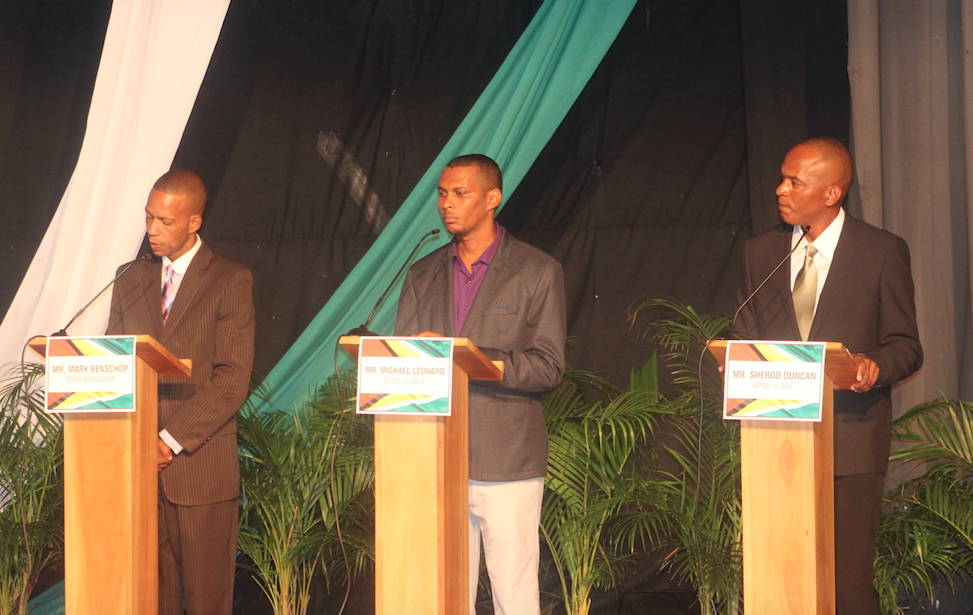 Team Legacy’s Michael Leonard raised concern about too much spending at City Hall. He said there will be the need to review all of the spending done by the municipality and also said the town clerk ought to work closer with the council.

He said over the past months, city hall has increased its spending on projects in the run up to local government elections and that should not have been the case. Leonard proposed that systems ought to be put in place to ensure more revenue collection by city hall.

According to Mr. Leonard, there are many people who come in to the city daily and utilize city services but do not pay the city anything. He said some revenue collection may have to be put in place to target those persons.  Leonard also said it is time that the city council catches up with technology and implement systems that would see city residents using their mobile devices to pay for and access city services.

On the issue of vending, Leonard said the city will need to make better use of open spaces and work along with the vendors.

One of the highlights of the night came when Youth for Local Government’s Clayon Halley was asked which one of the other candidates on the stage he would have been voting for, had he not been running for office.

Halley said if he was on the outside, he would have wanted to hear more specifics from the candidates as to how they would be moving the city forward. He said as an outsider, he would have still been undecided.

But Halley positioned himself and the candidates under his group as the alternative to the main parties contesting the elections. He said while he believes in young people and their abilities, he would want to bring together that youthful energy with the experience of the older folks and have them work together to move the city forward. Halley said he believes the city also needs to examine new ways of revenue collection and strengthening that collection base.

Former Presidential Candidate for The Independent Party, Mark Benschop is contesting the elections under the Team Benschop umbrella. He appeared to take on the job as a councillor and dismissed a statement by one of the panelists that he has put himself out as the only candidate running for Mayor when he and the others are really seeking a seat on the council. He also noted that there needs to be a leveled playing field when it comes to the payment of rates and taxes.

Benschop was asked about the problem of clearing many of the city’s canals and how would he best deal with the issue of those persons living and squatting near to the canals. Benschop admitted that the issue is a problem, but it is a problem that he would be able to solve. He said it is important to ensure a properly drained city to avoid flooding, and he would meet and engage the residents about his plans before moving in to get better access to the canals. 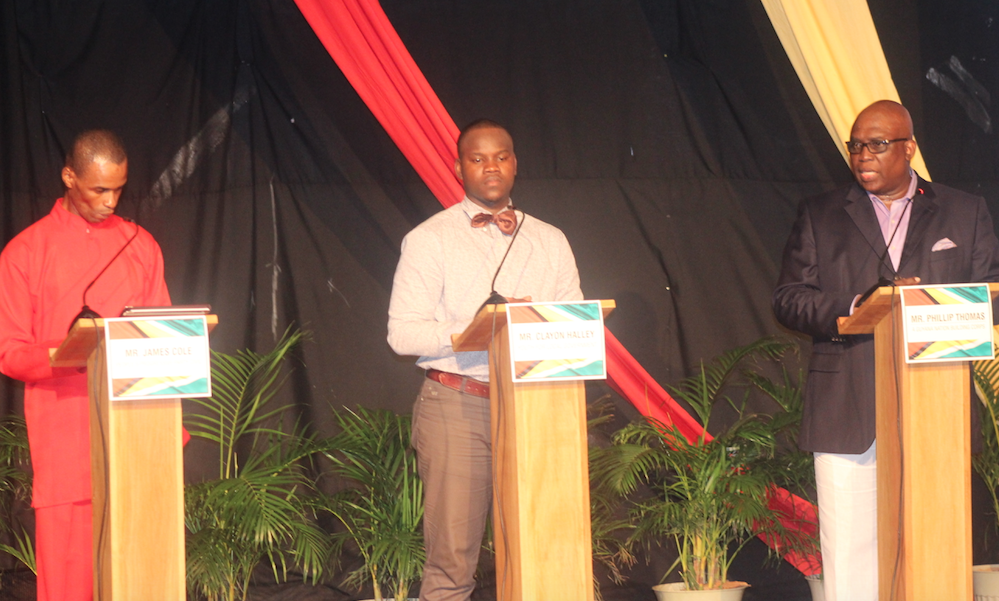 He said a city council should that he would be on, would be one that engages the people more and when Team Benschop moves in to city hall, city residents will see just that. On the issue of security, Benschop said the city constables must move on from just receiving money from vendors and deal with security issues plaguing the communities that make up the city.

The PPP’s James Cole said he believes his experience of over two decades as a teacher makes him very qualified for the position of city councillor. When he was pressed on some of his plans and policies, he said many of them are still being worked out at the level of the party, but noted that accountability and integrity must be returned to city hall.

He was asked specifically whether his party had any plans to make the city more friendly to persons from the disabled community. Mr. Cole said that plan is still being worked out.

Dr. Philip Thomas of A Guyana Nation Builders Corps., said many of the laws governing the city council ought to be updated but councillors should also follow current laws in their quest to manage the affairs of the city.

While the forum was a debate, the candidates did not challenge each other on the various plans of their parties or groups. The large panel that asked questions ventured outside of municipal matters in several instances and that did not work well for the format or for many of the candidates.

Debate organiser, Nigel Hughes said “better must come” and he intends to take the debate cycle across the country to all of the communities where candidates are vying for seats at the local government level.