The National Trust of Guyana has written to the Government over what appears to be a move by the Ministry of the Presidency to repaint the State House in new colours.

The State House, which is the official residence of the President and a national monument, has historically remained in its original colour of white over the years. However, following recent repairs to a section of the back of the house, contractors have started to paint the section green.

When asked about whether the entire State House will be repainted in the colour green, President Granger today said “the whole of Guyana is going green”.

News Source contacted the Chairman of the National Trust, Lennox Hernandes and he explained that while there may be no regulations governing the colour of the building, there are guidelines that should have been followed with the National Trust before moves were made to change the colour.

He said that the National Trust has not been contacted about the change of colour and noticed the changes being made this week.

According to Mr. Hernandes, the building is of great historical importance to Guyana and as such, the National Trust needs to be contacted and consulted on changes. He said the National Trust has since written to the government on the issue and discussions have started.

The National Trust Chairman reminded that over the years, the colour of the Parliament Buildings have changed, but consultation on those changes would have had to taken place since that too is a national monument.

He said many of the buildings were painted white during the colonial years and those colours remained.

The structure is sometimes addressed as Guyana House and was formerly known as Government House. The original structure was built in 1823 on a small piece of land belonging to the first Anglican Bishop to British Guiana, William Piercy Austin.

In 1853, the British Government bought the building which was described as a two-storey timber structure with a double stairway facing Carmichael Street which stood on two metres (eight feet) high brick pillars. 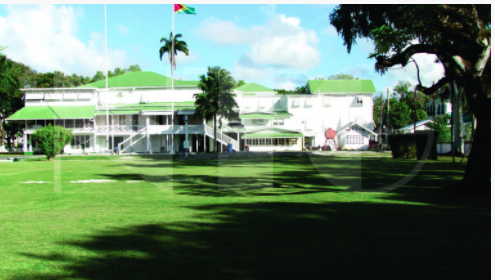 According to the National Trust, sometime in the early 20th century, the entrance was relocated to Main Street and some additional work was done to improve the aesthetic of both the building and the compound.

After independence, the building was renamed State House, since it no longer housed Governors but the Presidents of an independent Guyana.

While President Arthur Chung chose to live at State House, Presidents Forbes Burnham and Desmond Hoyte chose Castelanni House as their place of residence. When he came to office in 1992, Dr. Cheddi Jagan moved into State House. It also served as the official residence for President Jagdeo and President Ramotar.

President Granger, who is also a historian, moved in to the House when he took office in 2015. Almost immediately, works began to start repairs on the historical building since several sections were rotting and falling apart.

Earlier this year, repair works were also done to the Office of the President and that entire complex has been repainted green. The move appears to be in keeping with the President’s focus on developing a “green economy”.

Green is the dominant colour on the flag of Guyana and represents the country’s large forests. It is also one of the main colours used by the President’s party during the election campaign.