The move by the NBS came as Marshals of the high court moved in to levy assets of the financial institution in keeping with a Court order. For more than two and a half hours this afternoon, the New Building Society Limited kept the doors of its Headquarters shut, locking staff and customers in, and the Police, Attorneys, Court Marshals and other customers out.

The move by the NBS came as Marshals of the high court moved in to levy assets of the financial institution in keeping with a Court order.

The Court order was granted following the bank’s refusal to pay up $59 million to its former CEO Maurice Arjoon for wrongful dismissal.

That wrongful dismissal case had been ongoing for years before judgement was recently granted. The NBS is now appealing that judgement.

Attorney Sanjeev Datanin, who is representing the interests of the former CEO, told News Source that he was surprised by the move by the NBS to lock out and lock in officers of the Court and even law enforcement.

He said the by being in the banking business, the NBS should be well aware of how court levies work and it should have been obeying the order of the Court. 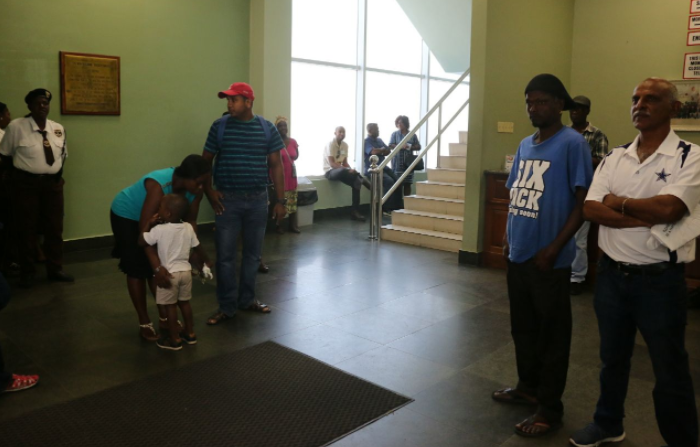 Customers locked inside the NBS

But the Attorney for the NBS, Pauline Chase, said the levy ought not to have been taking place since the matter has been appealed.

While she could not say who at the NBS gave the order to shut the doors, leaving staff and customers detained, she maintained that the matter should have awaited the appeal, as is usual courtesy.

Even when Police Senior Superintendent and 2nd in Command for A’ Division, Wendell Blanhum arrived on the scene, the NBS did not budge. He said he wanted good sense to prevail, but he warned the Attorney for the NBS that the bank was breaking the law by its actions, including detaining the customers against their will.

Eventually some customers were allowed to leave the NBS through the back of the building even as the Police and Marshals of the Court were prevented from entering.

It was just before 4 o clock this afternoon that the security inside finally got the green light from management to open the doors, allowing the Attorneys, the Marshals and Police inside.

Police investigators were also taken inside to begin questioning all those who were not allowed to leave the bak.

The NBS also issued a $59 million Demerara Bank check in the name of Maurice arjoon this afternoon, but that move came after Demerara Bank would have already been closed.

A number of persons from the NBS were taken into custody for questioning by the Police.