Occupational Safety at Bosai being investigated The Ministry of Natural Resources has launched an investigation into Occupational safety practices at the Bosai Bauxite company at Linden in wake of Thursday’s tragic accident in the East Montgomery mines which left three workers dead and two others seriously injured. The three workers who died have been identified as Michael Williams, Linden Trenton Gardner and Kester Grant.

In a statement, the Natural Resources Ministry said the Guyana Geology and Mines Commission, the Ministry of Labour and other agencies have been mandated to conduct “an urgent investigation and to examine occupational health and safety concerns at the company’s operation”.

The tragic accident occurred just after noon on Thursday as a 4X4 vehicle transporting the workers across the mining area attempted to overtake one of the company’s heavy-duty Caterpillar 777 trucks. The driver reportedly lost control of the vehicle and it slid in the path of the heavy-duty truck. The 4×4 vehicle was crushed with the 5 workers trapped inside of it. 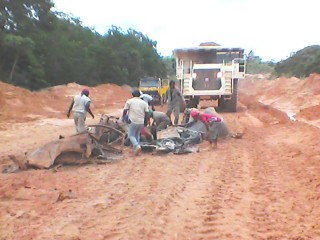 Other workers who were in the vicinity rushed to the aid of the trapped Bosai workers but only two of them were pulled alive from the wreckage. The other 3 workers were crushed to death.

The two who survived were rushed to the Mackenzie hospital where they were rushed into the operating theatre for emergency surgeries.

The accident is the worst tragedy to take place at the Linden Bauxite operations in over two decades. The bauxite operations would usually be done under specific safety standards and there are rules governing the operation of heavy duty vehicles and other vehicles in the same area.

The Minister of Natural Resources, Robert Persaud has said he wants the probe to be detailed but done in an expeditious manner.

The Guyana Police Force has also indicated that it will be carrying out  its own investigation into the incident.

Meanwhile, the opposition party A Partnership for National Unity in expressing its sympathy to the relatives of the deceased and the Linden community issued a  call on the Ministry of Health to mount an investigation to determine if any Occupational Health and safety standards were breached.

The APNU also wants the Geology and Mines Commission to look into this incident so as to ensure that best practices for operational safety are being employed by BOSAI.

The Ministry of Natural Resources and the Guyana Geology and Mines Commission have also issued their sympathy on the lost of life at the Bosai Bauxite Company.

4 Responses to "Occupational Safety at Bosai being investigated"