Post mortem performed on woman’s remains at scene of discovery Government Pathologist Dr. Nehal Singh traveled to Turkeyen on the East Coast of Demerara on Friday morning to perform the post-mortem on the remains of a woman’s body that was found in a clump of bushes in the same area on Thursday night.

Most of the body was decomposed forcing the police to make a decision to have the autopsy done at the site rather than for the remains to be removed and taken to the morgue.

With several investigators at his side, Dr. Singh stooped in the mid morning sun to inspect the mostly skeletal remains of the woman. News Source understands that just one leg of the body contained flesh. The rest of the body had decomposed and may have been destroyed also by vultures and stray dogs in the area. 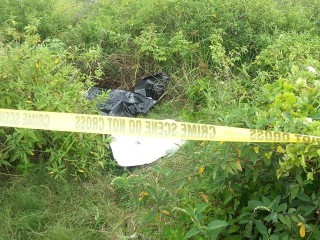 The pathologist and crime scene investigators spent just over an hour carrying out their examination and at the end, they offered no comment to the media.

The investigators were seen gathering various  pieces of evidence including what appeared to be a woman’s underwear and a used condom which was discovered close to the remains.

The remains of one of the hands appeared to have been bound. Police sources said it also appeared as though the woman may have been tied up and raped and her body dumped in the clump of bushes weeks ago.

School Teacher Nyozi Goodman has been missing for over two weeks and all searches for her have turned up empty handed. Police investigators believe strongly that the remains discovered on the Turekeyen land may belong to the missing teacher. DNA and other tests may now have to be done for 100% confirmation.