Fight the PPP and not each other -Granger tells PNC Congress Amidst  worry that some eligible members may not be on the delegate’s list, Leader of the People’s National Congress Reform David Granger called on members of his party to move away from fighting each other and instead focus their energies on fighting the PPP.

Speaking to the hundreds of supporters and special invitees who gathered for the opening of the PNC’s 18th biennial congress, Granger said the government of President Donald Ramotar has failed the Guyanese people and the pressure must be kept up on them as the PNC moves towards more inclusionary democracy at every level.

“Come with me, let us  together fight the PPP, not one another but the PPP”, Granger said to loud applause in the Congress Place auditorium. He was clearly pointing to the recent fallout between PNC General Secretary Oscar Clarke and Member of Parliament Vanessa Kissoon of Region 1o.

The two have been using the press to explain their side of a  verbal confrontation between them that resulted in the suspension of Kissoon from the party. That suspension did not keep Kissoon away from the opening as she arrived just as the sun was going down, with more than 40 members of the party from the region which she represents, Region 10.

Granger appeared more focused on, and concerned about the national issues facing the country than the squabbles in his party. During his one hour speech, he rolled out a  new concept  of national unity and a national unity government. The “One Guyana” project is one that Granger believes is good for Guyana and one that will see the country moving forward with healed political wounds.

Mr. Granger said the PNCR’s ‘One Nation’ approach could be the main means of combining the talents of a wider constituency and of creating the conditions for social cooperation and economic progress. He noted that “the three-fold purpose of such a project would be to reach a broad consensus on the goals of national development, to establish a sustainable institutional architecture and to create effective policy instruments for the achievement of our common objectives”.

According to the PNC and Opposition Leader, his party “understands that the building blocks of One Nation include not only new policies but also a continuous process of party reform. Our Party, therefore, is continually renewing itself within the Partnership as a movement to give a voice to people from every part of the country and every part of our great diaspora” 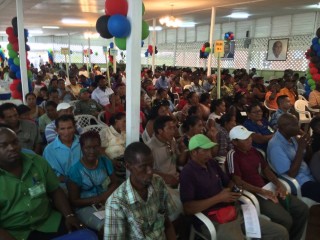 “The PNCR’s ‘One Nation’ approach could be the main means of combining the talents of a wider constituency and of creating the conditions for social cooperation and economic progress. The three-fold purpose of such a project would be to reach a broad consensus on the goals of national development, to establish a sustainable institutional architecture and to create effective policy instruments for the achievement of our common objectives”, Granger said.

He explained that the project shows how the party’s policy programme, once it returns to government, will be relevant to people’s everyday experiences and expectations, adding that “our resilient and resourceful people and communities are eager to play their part in rebuilding our country as One Nation”.

Mr. Granger told his party’s members that the PPP Civic government has turned away from every opportunity to forge a government of national unity and to be more inclusionary.

“President Donald Ramotar took a great leap backwards at the 30th Congress of the People’s Progressive Party on 2nd August 2013 at Port Mourant. His vituperative tirade was a threat to the prospect of inclusionary democracy and a menace to the project for national unity. He had the opportunity at the PPP’s first congress in five years to drop his party’s time-worn, winner-takes-all approach and adopt an inclusionary approach to governance. He lost it. He went instead on an unapologetic and uncompromising offensive against the Opposition in the National Assembly and the independent media”, Granger said.

Through his speech, the PNC Leader  highlighted many of the problems facing Guyana currently, from the security crisis to the poverty level. He said there has to be cooperation for the country to move forward. He appears convinced that a government led by the APNU will be able to provide Guyanese with that change in leadership and cooperation that many may be looking for. The PNC makes up the largest bloc of A Partnership for National Unity, which consists of several other smaller parties.

Granger is being challenged for the Leader position in the party by former General Secretary Aubrey Norton and Region 10 Chairman, Sharma Solomon.

The opening of the Congress saw several cultural performances by various dance groups and the launch of the party’s Congress song “Unity” which was sung by reigning soca monarch Kwesi Ace.