"The PPP is an old tactical party. It has raised the issue of the credibility of the elections and it has no scintilla of proof that something has gone wrong. And in fact the PPP has now put itself against the world...this is theatre and now they have to follow up with the theatre and get the circus going", PM Nagamootoo said. Having served the People’s Progressive Party in both opposition and government for 50 years, Prime Minister Moses Nagamootoo is not impressed with the PPP’s ongoing protests against the May 11 elections and its boycott of the opening of parliament. Mr. Nagamootoo walked away from the PPP four years ago to join the Alliance For Change.

In an interview with News Source, Prime Minister Nagamootoo said the PPP is using old tactics to put on a new show to defend its protests over the recently held elections.

“The PPP is an old tactical party. It has raised the issue of the credibility of the elections and it has no scintilla of proof that something has gone wrong. And in fact the PPP has now put itself against the world…this is theatre and now they have to follow up with the theatre and get the circus going”, PM Nagamootoo said.

He predicted that his former party will stay out of parliament for a while to send the message that it still does not agree with the results of the elections. The Prime Minister also believes that the opposition party may have caught itself in a jam in deciding who will take up the 32 seats in parliament from among its very large candidates list. 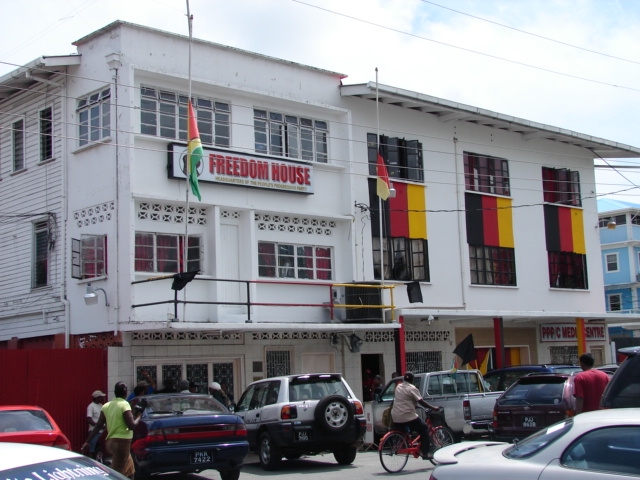 Headquarters of the PPP – Freedom House

But Nagamootoo is of the view that a rift may be developing and growing in the party and its leadership over the elections loss. He said the fact that General Secretary Clement Rohee is open to being Opposition Leader when there are two former Presidents on the list, is an indication that the party may be moving in different directions.

According to the Prime Minister, “there is so much division in the party right now, they do not know who to read. Imagine of all the people, they are talking about Clement Rohee as Leader of the Opposition. It means that Jagdeo felt that he is unacceptable by the rank and file and Ramotar feels that he has led the party in two successive defeats and its time to get his pension and hit the road and Ms. Elisabeth Harper has not been heard from or even seen since the elections. They clearly have a problem of succession and there is the dilemma of finding people to go into the parliament”.

Nagamootoo said he is convinced that the PPP also wants to stay out of parliament as a campaigning tool to go to its supporters and complain even more about the elections. He believes it could all backfire.

The PPP Civic won over 202,000 votes at the May 11 elections. While some party candidates and supporters have been calling for the party to take up its 32 seats in the National Assembly, the leadership of the party has been delaying that move by pointing out that it is currently conducting consultations on the issue across the nation.

The PPP Civic maintains that it only lost the elections because of irregularities and “rigging”. The party has not provided any concrete evidence to back its claims and the international community and the Western diplomats have all declared that the elections were free, fair and credible.