PPP was “all bluff” and not sincere in efforts to reform security sector -Pres. Granger

The President told the gathering of high ranking Police and Army officials that the attempts over the last 20 years were insincere as they treated the illness and not the symptoms of the illness. President David Granger on Thursday said attempts by successive People’s Progressive Party governments over the last 20 years to reform the security sector were “all bluff” and were not intended to work.

Mr. Granger was at the time receiving the Report on the United Kingdom Security Sector Reform Programme from British Expert Mr. Russell Combe at State House.

“This is an extremely significant event because it is part of the process that started nearly 20 years ago. It came about because of the escalation in narcotics trafficking and the accompanying surge in violence,” he reminded.

The President told the gathering of high ranking Police and Army officials that the attempts over the last 20 years were insincere as they treated the illness and not the symptoms of the illness.

“They wanted to deal with murders but didn’t want to deal with the cause. Nothing was being done to address the root cause of crime which started to corrupt the security forces… it was all a bluff,” he said.

Mr. Granger said the attempts by the previous government were not intended to succeed and in turn failed as the measures were not dealing with the cause of crime, only the manifestation of crime.

He recalled several interventions by the PPP over the last two decades and the crafting of several Bills but insisted that it never addressed the problem.

“We passed through nearly 20 years of woulda coulda and shoulda without any attempt to seriously deal with the security problem in this country and like a disease you can’t pretend to treat it without actually getting down to the root cause.”

He reminded that the first thing he did after being sworn in as President in May 2015 was to seek help from the UK to correct the errors of almost 20 years.

During the 20 years, the UK did offer its assistance and left several recommendations with the government, many of which were not implemented. 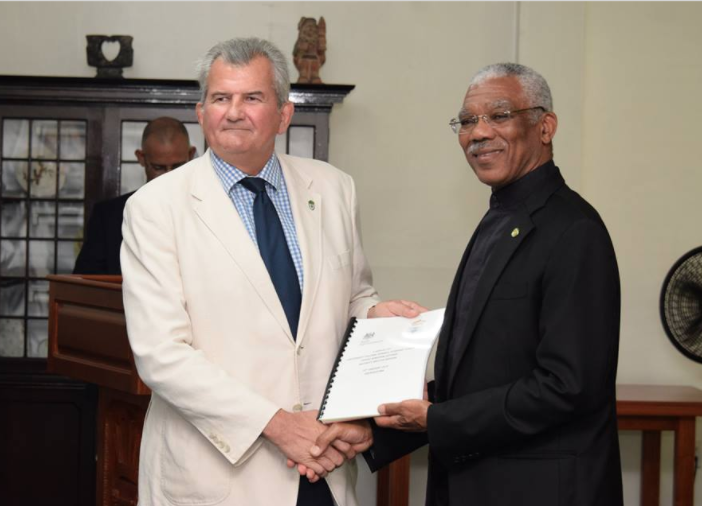 Already, Mr. Granger has requested Combe to return to complete the work he has started.

“He has been on the ground and is very aware of the scale of the problem… we can now get away from the pretense and insincerity of the last two decades and make Guyana safe and I want to thank him for the work he has done.”

Combe during brief remarks explained that the report builds on the interim report submitted in June 2017.

“The report is dynamic and does not to represent just the beginning. Activities have already commenced so nor is it the end,” he said.

He confirmed that he is likely to return in April and continue his work out of the Ministry of the President until March 2019.