The second gunman who was shot dead  on Monday night during a stand off with police after robbing a Montrose supermarket has been identified as 24-year-old Mahendra Sukull aka Vikki of Prashad Nagar.

The other dead gunman was identified as policeman Warren Blue who was wanted for the murder of Agricola teenager, Shaquille Grant who was killed in 2012.

The two gunmen were killed during an almost 30-minute shootout with police officers who responded to reports of the robbery being committed at the Lahago supermarket at Montrose on the East Coast of Demerara.

When the Police arrived on the scene, Blue and Sukhull were reportedly about to exit the store when they were confronted. They both retreated and opened fire on the lawmen who returned gunshots. 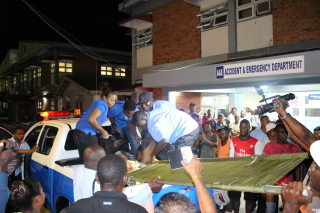 When the gunshots ended, both men were found dead on the floor of the supermarket. The police said they recovered two unlicensed .32 Taurus pistols with five rounds along with a number of .32 spent shells at the scene.

The owner of the supermarket was shot to the right leg by one of the gunmen and beaten to  the head while her young daughter was also gun butted during the robbery. Both were taken to the Georgetown Hospital for treatment.

Relatives of the dead men identified their bullet riddled bodies  on Tuesday morning at the Georgetown Hospital mortuary.

Family members and friends of Mahendra Sukull said they have been left in shock  over the way  he died. Many of them left messages on his Facebook page expressing shock that the young man believed to be in early 20’s was even  involved in a life of crime and criminality.

One friend told News Source that the young man  who is a former student of the Mae’s private school was very easy-going and quiet. “This is just shocking. I can’t believe it. This guy was always the life of the party, he enjoyed going out and having a good time with friends and I don’t think any of us knew that he was involved in this kind of stuff, this is all like one big dream”, the friend told News Source.

Another friend expressed disbelief that the young man had “gone down that path”.

The other gunman who was killed at the scene, policeman Warren Blue, was on the run from law enforcement for just over two years. Murder charges were filed against him back in 2012 for the shooting death of Agricola  youth, Shaquille Grant. Two other policemen were also charged with the murder. The 17-year-old Shaquille Grant was in a relatives yard hanging out with friends when Blue  and a group of  other policemen raided the yard and accused them of planning a robbery.

Grant was shot multiple times as he was forced to  lie on the ground. Another young man was also shot but survived his injuries.

Shaquille Grant’s mother recently told the media that she knows that she would get justice for her son. She believes that justice is slowly trickling in now that one of the men believed to be responsible for his murder has been killed.

Another policeman remains on the run for Grant’s murder while a third is facing a High Court trial.