Relatives of 26-year-old Shaka Chase say they do not intend to give up the fight for justice as the East Ruimveldt man was charged for the murder of Police Corporal Romain Cleto even as concerns have been mounted about the man being beaten and tortured into confessing to the crime.

Chase appeared in Court on a rainy Monday morning in Georgetown and was not allowed to enter a plea to the indictable charge of murder when it was read to him by Chief Magistrate Priya Beharry. The Magistrate remanded him to prison on the charge and set his next court appearance for Thursday, May 23, 2013.

During the Court appearance, the young man’s Attorney Nigel Hughes revealed to the court that the Police did not take statements from witnesses who could confirm his client’s alibi at the time that the shooting death of the policeman took place. He said he has since sent those statements to the Director of Public Prosecutions. Magistrate Beharry questioned the Police Prosecutor about the advice of the DPP in the matter and the Prosecutor told the Court that the DPP’s advice was not sought.

With Hughes putting forward the statements he recorded from the witnesses who are willing to testify about Chase’s whereabouts at the time of the killing, the Director of Public Prosecutions is expected to review the entire file before the case comes up again on Thursday.

Attorney Nigel Hughes told the Court that the young man visited the Police station on a number of occasions after his name was being mentioned as a suspect. On all of those occasions, he was questioned and released until last Thursday when the police rearrested him and decided without advice from the DPP to file the murder charges. 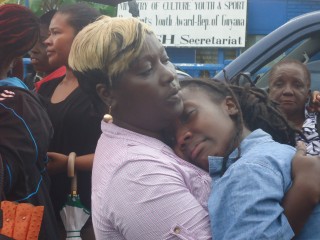 The Prosecutor contended that gun powder residue was found on the hands of the accused when he was swabbed by the Police. However, Hughes questioned the truth behind that statement and told the Court that he does not understand why the Police would then release the man if they had found gun residue on his hands when he was swabbed on the same night of the murder when he turned himself in. The Attorney has said that the Guyana Police Force has once again instituted charges without a proper investigation being conducted.

Attorney James Bond who is also representing the interests of the East Ruimveldt resident along with Hughes, also told the court about the burn marks the man has about his body which they said are an indication of him being “electrically shocked” and tortured. The Guyana Police Force has not offered any statement about the torture allegations.

As the young man was taken away from the Courtroom, family members broke down in screams. His sisters wailed loudly as the handcuffed youth was taken to the Court’s lock-ups. His sister Sarah Chase said the family was not giving up and will remain at the side of the young man. She said she was the one who accompanied her brother to the Police on every occasion that he visited them following the murder.

The family has also expressed shock at the way the young man was treated while in custody.

Relatives of the murdered Police Corporal were also in Court for the hearing and left the Courthouse just as the case was adjourned. The Policeman was shot dead on Avenue of the Republic on April 27 as he approached a heavily tinted vehicle.

The occupants of the vehicle were reportedly armed with a number of high-powered weapons and handguns. Two other policemen were forced to seek cover as the gunmen opened fire on their parked vehicle.