The call was issued on Thursday at the opening ceremony of the Social Cohesion Round-table at the Arthur Chung Convention Centre, Lilliendaal.

“Political leaders have a particular responsibility to inspire; motivate and encourage Guyanese people to ensure that they are one nation, one people with one destiny,” Sir Shridath told the gathering.

He said the need for national unity in Guyana is not a new one but rather, has been pursued for years with no great success. He, however, noted that most recently, this has been changing and it is his hope that the change continues.

“While Guyana has not attained the aspirations of our motto, the shared heritage has trumped the divisiveness of the history of slavery and indentureship and there has emerged, albeit admittedly too slowly, a mutli-racial society, in which the oneness of being Guyanese is gradually prevailing over the separateness of the past. Guyana has to ensure that the light not tainted by the past, continues to shine,” the respected diplomat said. 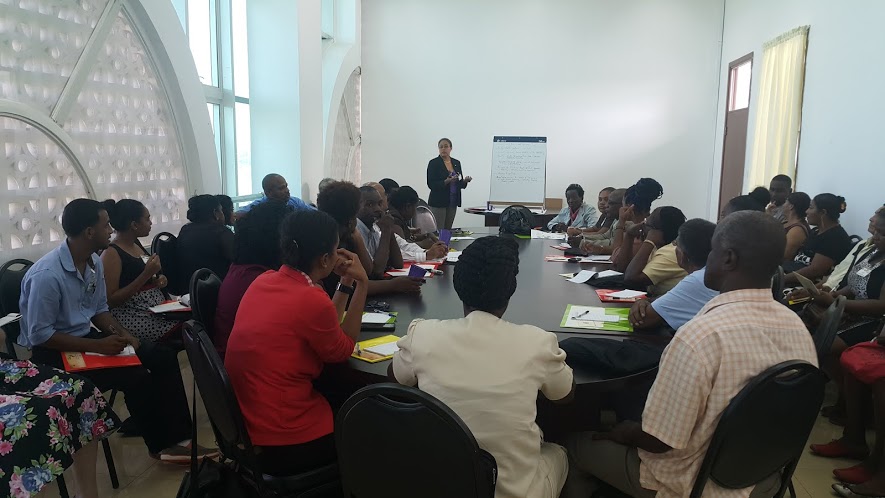 One of the sessions at the Social Cohesion roundtable

Sir Shridath noted that while past leaders led the separation and segregation in the country, it is now the responsibility of all Guyanese to ensure that this does not persist.

“The colonisers imposed on Guyana; a policy of racial division, as an instrument of control. Some of the leaders that replaced them adopted the same measures for their own intents. A few even proposed partition. All this has left this country as one nation in name and one people except in politics. All Guyanese must summon the joint history of struggle to inform the joint future of prosperity, to which they aspire,” he said.

He pointed out that for far too long, the political atmosphere here has been stifling the country and it is time that this be brought to an end. It was on this note that he applauded the move by President David Granger to engage the Opposition for inclusive governance to be truly achieved.

The call for politicians to take greater responsibility in the promotion of social cohesion was followed by the recommendation for the introduction of Civics, as a core subject in the school system, so that social cohesion can be better fostered.

He also recommended that the government introduce a Civics course, from the primary to the tertiary level of the education system so that a greater sense of tolerance and respect for differences can become a reality.

The aim, he said, should be to provide all pupils receiving a primary education with a broad knowledge and appreciation of the historical Constitutional basis of the State, of the administrative and political functions of the racial, cultural and other elements of society and the rights and responsibilities of citizens with due emphasis on tolerance and respect for cooperation.

“Differences should be taught and seen as enriching rather than as a divisive,” he reasoned.

The People’s Progressive Party has decided to stay away from the government sponsored event.

The sessions will continue today, when the final document for the 5 year strategic plan will be crafted for implementation. (MOTP)