In a statement on Monday, British High Commissioner to Guyana Greg Quinn said the UK was grateful for the support and assistance received from Guyana. "Her Majesty’s Government, and the UK National Crime Agency, are extremely grateful for the support and assistance provided by the Guyana Customs Anti-Narcotics Unit and the Guyana Police Force during the investigation", He said. Law Enforcement Agencies in Guyana are being hailed for the assistance they provided to UK authorities which resulted in the the convictions of two persons in a major drug trafficking case.

The men were found guilty of the trafficking of 3.2 tonnes of cocaine with an estimated street value of 512 million pounds sterling.

The charges against four crew members were found not proven and three others had been acquitted earlier.

In a statement on Monday, British High Commissioner to Guyana Greg Quinn said the UK was grateful for the support and assistance received from Guyana.

“Her Majesty’s Government, and the UK National Crime Agency, are extremely grateful for the support and assistance provided by the Guyana Customs Anti-Narcotics Unit and the Guyana Police Force during the investigation”, He said.

Quinn said the UK is also grateful to those witnesses from Guyana who were willing and able to give evidence during the trial. “Our cooperation has resulted in a significant drug interdiction and the conviction of those involved in this crime. We look forward to continued cooperation in the coming months and years”, he added.

The UK’s National Crime Agency (NCA) issued a statement on the investigation and convictions.

The cocaine, with an estimated potential street value of £512 million once adulterated, was found concealed on board the vessel in April 2015. 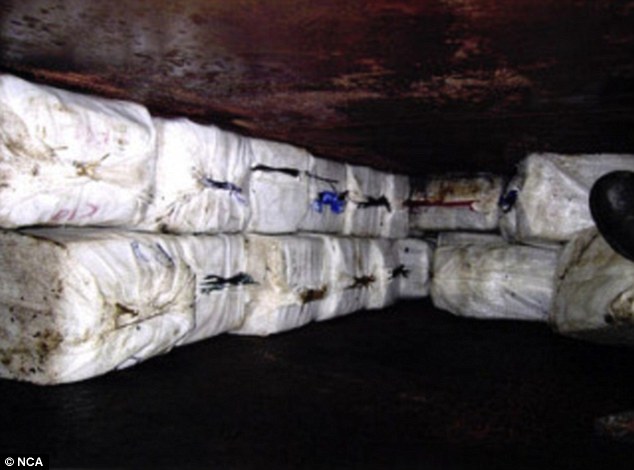 The NCA said that the vessel had been intercepted by the Royal Navy destroyer HMS Somerset and Border Force cutter HMC Valiant in the North Sea approximately 100 miles off the coast of Aberdeenshire.

The Royal Navy Ships were acting on intelligence supplied by the NCA, working in co-operation with the French customs investigation service DNRED and the UK’s National Maritime Information Centre.

NCA officers were deployed on HMS Somerset as the MV Hamal was boarded and taken to the Scottish Port of Aberdeen.

After the vessel arrived in port on Friday 24 April various teams began a search.

“Ballast tanks on the Hamal were pumped out so that search crews could gain access. As they began to drill through a metal panel inside one of the tanks, a white powder was seen on the drill bit. It tested positive for cocaine.

“The panel was removed, revealing bales of cocaine concealed inside a neighbouring compartment. The way the bales were stacked inside showed that there must be another access point in the vessel.

“Investigators began a detailed search for the main access point and in crew quarters above the compartment, underneath a medical cabinet, they found an area of floor that had been cemented over. They chipped through the cement and found a sealed metal hatch, which provided access to the tank containing the cocaine.

“Border Force officers wearing specialist breathing equipment entered the tank and over the next two days (27 and 28 April) 128 bales of cocaine were removed, each weighing approximately 25 kilos. The total weight of the cocaine taken off the MV Hamal was in excess of 3.2 tonnes.

“A mobile crane removed the recovered bales from the vessel and Police Scotland then took the drugs under armed guard to a secure location”, the NCA said.

NCA officers then detained the nine Turkish crew members and they were formally questioned in Aberdeen, while investigators searched the ship for clues as to the vessel’s route.

The NCA said that a deck log and engine log books stated that the vessel had spent time in West Africa after leaving Turkey. The NCA said that analysis of the ship’s navigation system showed that, even though the AIS navigational beacon was turned off, GPS had continued to monitor movements on a laptop computer.

“This proved that the ship had sailed from Tenerife on 8 March 2015 and travelled across the Atlantic, arriving in Georgetown, Guyana, on 21 March. It left five days later and, significantly, paused its journey for around 12 to 15 hours around two days after leaving port. This is where investigators believe the drugs were loaded on.

“Following the seizure NCA international liaison officers worked with the Guyanese authorities to trace the location of the vessel whilst it was in Guyana as well as obtaining details regarding individuals associated with it. Mobile phone evidence placed a number of the crew in the Georgetown area of Guyana, contradicting the log books.

“Officers also recovered a coded satellite phone email message from the vessel, containing a series of numbers. When checked against a key found in a notebook on board this corresponded with co-ordinates for a location in the North Sea, north of the Dutch/German border, where investigators believe the drugs would have been offloaded”, the NCA added