Police Cadet Officer, Franz Paul was on Monday remanded to prison after he was slapped with four charges in connection with the shooting in the mouth of 15-year-old Alex Griffith.

Paul was charged with perverting the course of justice, unlawfully assaulting the teenager, inflicting grievous bodily harm and intent to maim, disfigure and disable the 15-year-old boy.

Another policeman, Corporal Bachan Singh was charged with perverting the course of justice. He was granted bail in the sum of $150,000 for that charge.

Cadet Officer Paul was granted bail in the sum of $150,000 for perverting the course of justice and $75,000 for the unlawful assault charge. However, he was refused bail on the inflicting grievous bodily harm and intent to maim, disfigure and disable charges.

He was remanded to prison and his next court date will be at the end of June. 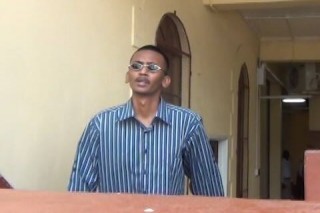 The charges stem from the April 30, 2014 shooting of the teenager in East Ruimveldt. The teen was in his house when the party of policemen arrived at the house to question him about a robbery they believed he had witnessed. The robbery was allegedly committed on the sister of the cadet officer earlier the same night.

In the presence of his mother, the teen told the policemen that he did not witness the robbery, but he was dragged from his house and beaten and driven away from the scene. The 15-year-old was repeatedly asked whether he witnessed the robbery and as he continued to answer in the negative, he said the police cadet officer placed a gun in his mouth with one bullet inside of it and started to play russian roulette and he continued to question him.

The young man said he began feeling a pain in his mouth and started to slip in and out of consciousness after he was shot in his  mouth by the officer. He was dropped off to the hospital by the same police officers who did not leave a statement with the police unit at the Georgetown Hospital.

Doctors at the hospital managed to quickly control the bleeding and saved the young man’s life. After he was released from the hospital he provided a statement to the police and positively identified the officer who shot him in the mouth.

The incident led to widespread outrage and protests by social activist Mark Benschop. The Police launched a probe that continued for weeks before the file was eventually sent to the Police Complaints Authority and the Director of Public Prosecutions for advice.

The family of the young man said they would like to see justice served in the matter.